Ler Teck Siang, the doctor at the centre of the HIV Registry data leak, has had his medical registration suspended for nine months and could face further disciplinary action, the Singapore Medical Council said in a statement on March 12, 2019.

SINGAPORE - Ler Teck Siang, the doctor at the centre of the HIV Registry data leak, has had his medical registration suspended for nine months and could face further disciplinary action, the Singapore Medical Council (SMC) said in a statement on Tuesday (March 12).

The suspension, which came into effect last Thursday (March 7), was ordered by an Interim Orders Committee (IOC) which will issue the grounds of its decision "in due course", SMC said in a statement.

The announcement comes after Ler's appeal against his conviction and 24-month sentence was dismissed by a High Court judge on Monday.

Ler, 37, was convicted in the State Courts in September last year for helping his American husband, Mikhy Farrera-Brochez, to dupe the Ministry of Manpower with a phony HIV test, and for giving a false statement to a public servant. The pair got married under American law in New York City in 2014.

Besides the seriousness of Ler's convictions, the SMC said that it took into account various drug charges that were brought against Ler, as well as a pending charge under the Official Secrets Act for failing to take reasonable care of information from the HIV Registry. 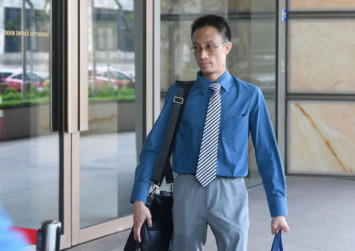 Ler is scheduled to go to trial in May for the drug charges, including administering methamphetamine at a hotel, possessing a syringe intended to be used for drugs and failing to provide a urine sample to the Central Narcotics Bureau.

Although the SMC recognised that Ler's appeal had not been dismissed at the time of the suspension, it said it also took into account the need to maintain public confidence in the medical profession while the legal proceedings were ongoing.

"The information on the convictions and the pending charges was therefore referred to an IOC for the purpose of determining if it was necessary for the protection of members of the public or was otherwise in the public interest, or was in the interests of Dr Ler, that his registration be suspended or be made subject to conditions or restrictions."

Ler's practising certificate expired on Dec 31 last year and its renewal had been under review following his convictions and sentencing.

He will begin serving his sentence next Thursday.

Farrera-Brochez, 34, who was deported from Singapore in April last year after serving a sentence for fraud and drug offences, leaked the personal information and HIV-positive statuses of 14,200 people from Singapore's HIV Registry online. He has since been charged in the US state of Kentucky for offences related to the stolen data.