SINGAPORE - After living in a two-room rental unit in Ang Mo Kio for 15 years, Mr Fedayin Ijan, 44, and his family of six were looking forward to moving to a four-room Housing Board flat next month.

As they were steadily preparing for the move, his daughters were hit by Covid-19 on Feb 11.

The girls, Daryn, seven, and Dania, 10, had their first dose of the vaccine last month.

"When they tested positive at the clinic, my wife and I were shocked but composed ourselves as we needed to explain to the kids what they should and shouldn't do at home while under isolation," said the freelance school bus driver.

As the unit's sole bedroom became his daughters' isolation room, the family tried to make do with the rest of the space they had. Mr Fedayin's two sons, aged 10 and 22, stayed in the living room with him.

His wife, masked at all times, moved into the bedroom to take care of the girls, who had a fever on some days. But she caught the bug four days later.

"My daughters became irritated at times during isolation because they did not have much free space in such a small room," said Mr Fedayin.

While running errands for his wife and doing his best to help them feel comfortable, such as by getting his daughters their favourite snacks, he also stayed guarded as he could not afford to catch the virus. 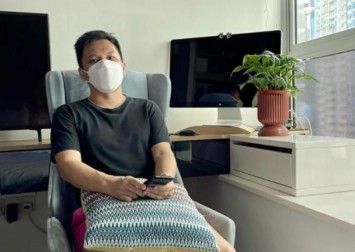 "Living with Covid-19 in a two-room flat was challenging as I'm self-employed and drive a school bus... I can't afford to get infected as I would lose income, and possibly some contracts as well," added Mr Fedayin, whose wife works in a gym.

During his daughters' and wife's infectious period, Mr Fedayin took an antigen rapid test every morning before heading to work.

After work, he thoroughly disinfected the house using a sanitising machine, and followed strict hand hygiene.

He and his sons have tested negative so far, and he hopes that streak will remain.

His advice to parents with infected children: "Keep calm, explain the situation to the kids, make sacrifices to be isolated together with the child if needed, raise your personal hygiene, and sanitise the whole unit regularly."

The family is hoping to stay healthy and virus-free when they move into their new and more spacious home in Yishun next month.