'I don't know where my money went', says customer after CIMB Singapore banking service reportedly down for 3 days

In a response to AsiaOne on Thursday night (Dec 30), CIMB Singapore has stated that all delayed funds have been credited to customers' accounts as of Dec 30.

It also attributed the delay due to the "high volume of fund transfers" through its online service.

Said a spokesperson from CIMB Singapore: "Some of our customers who used our SGD-MYR fund transfer service in the past three days have experienced delay in their funds being credited into their respective accounts.

"This is due to the high volume of fund transfers. However, as of today, December 30, 2021, the bank has contacted all affected customers and has notified them that the funds have been credited into their accounts."

CIMB Singapore's online banking system was reportedly down for three consecutive days since Monday (Dec 27), with one user complaining that his transferred funds had gone missing.

According to 8world on Wednesday, the bank had put up a statement on its website that morning, indicating it was aware that some customers using the CIMB Clicks internet banking service have encountered "intermittent connectivity issues".

It added that they were doing their best to rectify the issue and apologised for the inconvenience caused.

Irate customers of the bank took to CIMB Singapore's Facebook and Instagram pages to post their complaints as well as messages of frustration at the prolonged downtime. 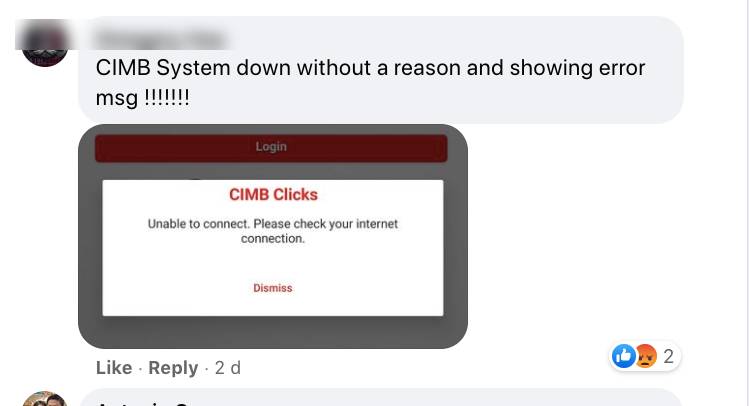 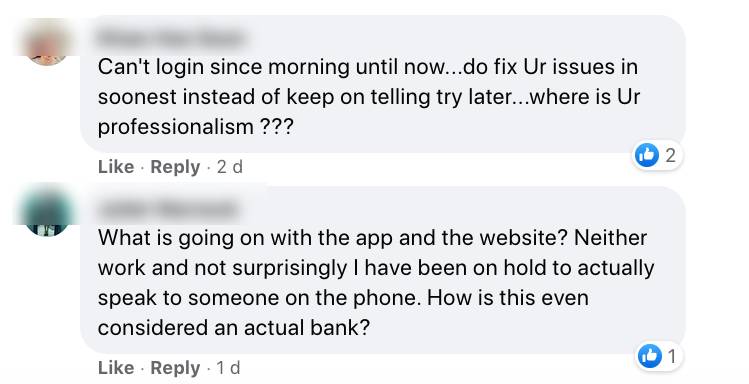 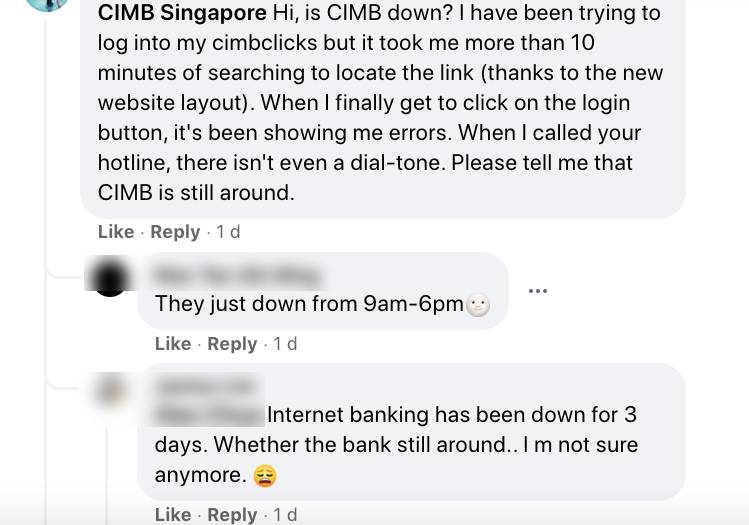 One customer sarcastically noted that accessing his bank account was "far more difficult than grabbing a VTL bus ticket back to Malaysia".

Lianhe Zaobao reported the bank was aware of customers who were able to access their account intermittently during the past three days, but were unable to make any transactions.

One of them told Zaobao that he had tried to access the online banking system for three days to no avail. He eventually got in at about 11am on Wednesday.

"I usually transfer money to my Malaysian account monthly, so when I managed to get into the system I performed the transaction as per normal. Everything went smoothly, but at the last step, an error message suddenly popped up so I didn't know where my money went."

The 36-year-old added that after multiple tries to the bank's hotline number, he managed to get through at about 12.30pm.

"Although I finally got through, the operator stated that the money is not in my Singapore account, and also not in my Malaysia account. Due to the service disruption, they were not able to do anything about it and they were also not sure when the service would be back up."

According to comments on CIMB Singapore's Facebook page, some users reported that the system was back online on Wednesday while others still struggled to connect.

In the latest update to their Facebook page on Thursday morning (Dec 30), CIMB Singapore again apologised to those who've "experienced difficulties in accessing CIMB Clicks in the past three days", but did not state if the service is back up.

We apologise for any inconvenience caused if you’ve experienced difficulties in accessing CIMB Clicks in the past 3...

The bank indicated that the intermittent connectivity issues were caused by the "high volume of traffic while logging in to check on our SGD-MYR rates".

The bank followed up the statement with a call for its customers to view the exchange rates that will be posted on the website "from now till Dec 31" instead of logging in via CIMB Clicks.

Comments on the most recent post however, suggest that the system is still unstable as of today.