'I felt my work was done': Former WP chief Low Thia Khiang who will not stand in GE2020

SINGAPORE - After almost 40 years in politics, 29 of them as an MP, former Workers' Party (WP) chief Low Thia Khiang, 63, says he is stepping down from electoral politics with no regrets.

The man who helmed the WP for 17 years said on Thursday (June 25) that he decided not to stand in the coming election as he felt his work was done.

As party chief, he had achieved the twin goals he had set for himself after taking over from the party's firebrand leader J. B. Jeyaretnam in 2001.

The first was to secure a group representation constituency for the WP, which he did in 2011.

That year, he famously left his long-time Hougang constituency to lead a team to victory in Aljunied GRC, the first and only time an opposition party had won in a GRC. 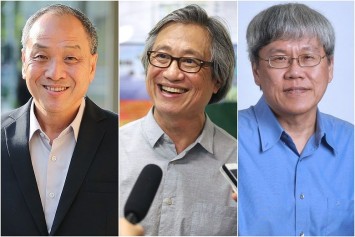 The second was to renew the ranks of the WP, and hand over to a new generation of younger leaders. Over the years, he has made a concerted effort to attract and field younger members in their 30s and 40s. In 2018, Mr Low stepped down as secretary-general making way for Mr Pritam Singh, 43.

In his first interview since his retirement from electoral politics was announced, Mr Low told The Straits Times and other media: "I hope that the Workers' Party itself has that spirit. The whole organisation's formation and process is important, and not just an individual... I have always maintained that a party cannot depend on just an individual or a few individuals."

It was also the first time that he was speaking to the media after a bad fall at his Upper Thomson home in April left him with traumatic brain injury.

He has since gotten much better after being discharged from hospital on May 21, and appears none the worse for wear.

But the fall he suffered when on the way to the bathroom has left a lasting injury to his olfactory nerve centre, robbing him of his sense of smell and the enjoyment he used to get from a steaming bowl of laksa.

"Laksa has many layers to it, now I can only taste that it is spicy and salty," he said, chuckling.

He was quick to add that it was a small price to pay. "Such a bad fall could have been very very serious, but now I am mostly ok. If I lost my sense of smell it is a small thing, so be it," added Mr Low who has been given medical leave until July 15.

Throughout his political career, the Teochew-speaking businessman can be said to have tasted, in Chinese parlance, "sourness, sweetness, bitterness and heat".

His experiences as a student at Nanyang University, which was made to merge with the University of Singapore, and later as a teacher who saw students from poorer backgrounds struggling, left him sour and disillusioned.

It pushed him onto the path of politics, which he felt was the only way to change people's lives.

The WP that he joined in 1982 was more focused on issues like human rights and took a more adversarial approach towards the Government, under Mr Jeyaretnam.

The party then was plagued by the same problems that other opposition parties faced, with infighting and an inability to attract good candidates.

But under Mr Low, who was elected party chief in 2001, it has taken a different direction, focusing on issues of the day and creating a brand of constructive politics that strives to provide a check in Parliament.

In 2011, Mr Low described the WP as a co-driver that would slap the driver, the PAP, if the ruling party were to go off course in governing the country.

His more pragmatic and moderate line has won credibility with the middle ground, gaining the party a broader base of supporters and also a new generation of members with not a few lawyers, bankers and academics.

On this front, he feels that the party has evolved even more with its new, younger leadership.

"Probably they are a different generation in terms of political debates. I would think that I'm more aggressive, but the younger generation like Pritam and Leon, maybe they want a different approach, which I think is not a bad thing," he said referring to Mr Singh and Non-Constituency MP Leon Perera.

"If I compare myself with my predecessor Jeyaretnam I think I am probably mild right? So probably this political progress, where you become less aggressive and you can sit down and talk about things rather than just political brickbats, is a good thing."

Asked about how he would rate Mr Singh's leadership so far, Mr Low said: "So far I think Pritam has been good in that from my observation (he has) done well in exchanges with the ministers."

He added that this was true of the party's other MPs as well as "they respond appropriately and they make a point although they don't go for some attack here and there like me".

The sweet taste of victory in Aljunied in 2011 did not last long, and after that general election, the WP's Aljunied-Hougang Town Council got embroiled in a saga over its accounts.

Observers say this had contributed to some extent to the WP's more dismal showing in Aljunied in 2015, when they scraped by with 50.96 per cent of votes.

The town council, through an independent panel, had successfully sued the party's MPs, including Mr Low, over more than $33 million in improper payments. Mr Low, and party chairman Sylvia Lim were found by the High Court to have breached their fiduciary duties.

In his ruling, the High Court judge said the two Aljunied GRC MPs had acted dishonestly when they awarded a managing agent contract to a company set up by their supporters without calling a tender.

He added that in doing so they had put their own political interests above the interests of their residents.

Mr Low, along with the other MPs and town councillors, have appealed the ruling.

Having been an opposition Parliament member for so long, Mr Low has taken some heat from the ruling party. But he is also one of few opposition politicians who have drawn admiration from both sides of the aisle.

On Thursday, asked if the party would lose some of its shine without him contesting, Mr Low, who is Singapore's most successful opposition politician to date, quipped: "I do not know how many voters vote solely because of me."

He sought to dismiss the notion that the WP is the "Low Thia Khiang party", adding that it has evolved since he was first elected into Parliament and became the party's only representative in the House.

In the past term of Parliament, the WP had a team of six MPs and three NCMPs, and people would judge the party based on their performance and their interactions with voters too, he added.

Asked how he would like his political career to be remembered, Mr Low said: "I do not have this hope that others will (remember me in any particular way). I have done what I should do, I have no regrets. Of course everyone will have different views. And as a public figure you have to accept them. That's all. I would not be surprised if someone is scolding me, I accept it."