'I might have died': Tennis coach escapes death from a heart attack thanks to weight loss

We all know the perks that come with healthy weight loss, but for one man, it saved him from a narrow brush with death.

"I might have died if I was still 90kg," Weber Oh recounted in a Facebook post on Wednesday (Mar 3), after recovering from a heart attack two weeks back.

His doctor had told him "[his] weight lost [sic] of 18kg in the last nine months saved [his] life", he recounted.

Here's to all my friends who are 40yo and above.. Here is an advice, please change to a healthy life style (healthy food...

Oh, a tennis coach, was motivated to lose weight after losing three friends, who played tennis with him, over the last two years due to heart related illness. As he was diagnosed with high blood pressure in 2016 and high cholesterol in 2019, their deaths became his wake up call.

He spent the past nine months working on his diet and increasing the amount of time spent exercising, thus he was able to lower his cholesterol to a normal level.

Oh had been on his way home with his father when he suddenly felt his chest tightening, and the sensation seemed to spread to his throat and jaw, he said in the post. Recognising it as a symptom of having a heart attack, he headed to a nearby clinic as soon as possible.

An electrocardiogram confirmed that he, indeed, was having a heart attack, and he was immediately ferried to Tan Tock Seng Hospital for an emergency surgery.

The blockage in his heart was cleared, and Oh has been recuperating since. 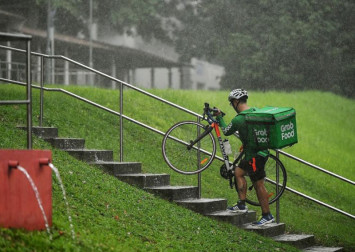 His near-death experience prompted him to share his experience online, hoping that others, especially those aged 40 and above, would not take their health for granted and adopt a healthier lifestyle.

He added: "Change your lifestyle if you want to live longer!"

According to the Singapore Heart Foundation, those whose body weight exceeds their recommended weight range by 20 per cent or more are three times more at risk of a heart attack compared to someone within the healthy weight range.

Obesity is associated with a high cholesterol, and increases the likelihood of high blood pressure and diabetes.

However, by losing just 10 per cent of one's current weight, the chances of developing weight-related coronary risk factors can be significantly reduced.