'I realised that I was burning and that my clothes had burned off': 22-year-old worker recalls of the Tuas factory explosion that happened in February

Mr Mehedi (left) suffered burns to his head, face, back, shoulders, arms, hands and leg in the Tuas explosion.

SINGAPORE - The first injured worker to testify during an inquiry hearing regarding the Tuas explosion in February said there had been several incidents involving fires, smoke and oil leaks leading up to the blast that killed three.

Mr Mehedi, 22, a Bangladeshi national who goes by one name, told an inquiry committee on Tuesday (Sept 21) that he had even put out a small fire just three hours before the explosion which occurred at 11.20am on Feb 24.

Mr Mehedi, the youngest of the 10 injured workers, suffered burns to his head, face, back, shoulders, arms, hands and leg.

He has also lost strength and mobility in his fingers and has blurred vision. Doctors have told him his eyesight will not return to normal.

Recalling the blast, Mr Mehedi said: "I felt a gust of hot air pushing me and I fell to the floor. I looked up and saw that the whole workshop was dark and filled with smoke. I realised that I was burning and that my clothes had burned off, leaving me with only my pants."

He added that he crawled out of the workshop and ran to a nearby open field, where other workers were shouting for help.

Mr Mehedi, whose statement was translated from Bengali, was testifying on the second day of public hearings before an inquiry committee looking into the explosion in a ground-floor industrial unit at 32E Tuas Avenue 11.

Three workers, Mr Anisuzzaman MD, 29, Mr Subbaiyan Marimuthu, 38, and Mr Shohel MD, 23, died from severe burns to 90 per cent of their bodies, and seven others including Mr Mehedi were injured.

The other workers who were at the unit during the explosion were Mr Hossain Jitu, Mr Molla Md Yousuf, Mr Rahad Asfaquzzaman and Mr Ahmmed Lizon.

They were employees of Stars Engrg, a company that installs fire protection systems, which includes sprinklers, risers and hydrants. 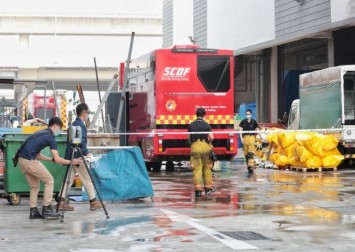 A mixer machine was used to mix several ingredients, including potato starch, to make fire clay, which is used to make the fire wrap.

The machine had nine heaters to heat oil in an oil jacket, a compartment that wrapped the mixer.

The committee heard on Monday that investigations found that the amount of oil used by Stars Engrg may not have covered the heaters as it was supposed to.

Mr Mehedi's main job at the Tuas workshop was to assemble the fire wraps at assembly tables, which were located below the mixer machine that was on a platform.

On Tuesday, he listed several incidents leading up to the explosion in which smoke, leaks or fires were observed on or near the mixer machine.

On Aug 28 last year, Mr Mehedi noticed smoke coming out from one of the heaters of the mixer machine.

It was not explained to him what happened to the heater, but he said it was later replaced by his co-worker.

On Sept 28 last year, Mr Mehedi saw that "a little bit of oil" was leaking out from the oil jacket when the mixer machine was in operation.

His co-worker told him that he had informed project engineer, Mr Lwin Moe Tun, of the leak.

Two weeks later, Mr Mehedi recalled that there was "something like smoke or oil" coming from the same area of the machine, but the leak had grown. His colleague then welded the area to close off the leak.

On Feb 12 this year, at around 4.50pm, a small fire broke out at the mixer machine's oil jacket while it was mixing the fire clay.

Mr Marimuthu and Mr Mehedi used a hose to put out the fire.

Mr Mehedi then noticed black beads of oil dripping down the machine where the fire had been. White smoke was also emanating from that area.

Mr Mehedi called Mr Chua Xing Da, the sole director of Stars Engrg, and told him about the fire. Mr Chua asked if anyone was injured and instructed everyone to leave the workshop.

The machine was later welded again and fire extinguishers were placed in the workshop.

On the day of the explosion, at about 8.40am, Mr Mehedi was working at an assembly table on the ground floor when he saw a small fire coming from a heater of the mixer machine.

He put out the fire with a fire extinguisher.

Afterwards, Mr Mehedi told Mr Marimuthu to tell Mr Chua and Mr Lwin Moe Tun about the heater issue and get instructions on what to do next.

He returned to making the fire wraps at the assembly table on the ground floor, where he was standing when the blast occurred.

Following the explosion, Mr Mehedi said that workers in the vicinity sprayed water on him and other injured workers using a hose.

Read Also
2 workers who died in Tuas blaze were in their 20s, supporting families back home 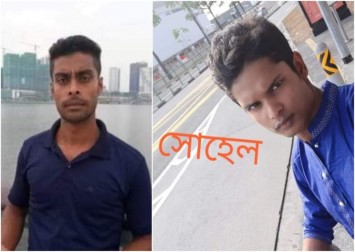 He was taken to the Singapore General Hospital (SGH) where he lost consciousness. He woke up three days later in the intensive care unit of SGH's burns unit.

Mr Mehedi was discharged on April 29, but continues to receive outpatient treatment for his burns and is undergoing physiotherapy for his fingers. He also visits the Singapore National Eye Centre every two months.

Doctors did not tell him how long his treatment will take to complete, but they said that his burn scars will not heal completely.

"Some of my burn areas are still painful, and I often experience a sharp pain to the back of my head," said Mr Mehedi.

He added: "I am the youngest of all the workers who were injured in the accident, and I had a whole future ahead of me before the accident. I would like to return to Bangladesh to see my family as soon as I can, after completing my treatment."