'I saw that the baby was already out': Doctor out cycling with friends helps deliver newborn at bus stop in Upper Thomson Road

(From left) Dr Chow Yuen Ho, Mardhiah Abdul Malek, Muhammad Annur Mohammad and Adrian Khoo with the baby who was born in the Tada Car.

SINGAPORE - At around 6.15 am on Sept 12, Dr Chow Yuen Ho, 48, was on his weekly morning bike ride along Upper Thomson Road with his friends when he heard someone shouting.

His first thought was that it was another angry motorist yelling at him for being on the road.

Turning his head, he saw a man waving a light on the road frantically, and calling out if anyone in their group was a doctor.

Seeing a car parked by the bus stop at Springleaf MRT, he thought an accident had occurred and medical assistance was required, so he was not prepared for what greeted him: a woman giving birth in the back seat of the car.

The parents had not expected the baby to arrive so suddenly. 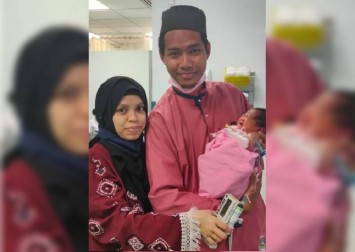 The story of this baby's uncommon birth made The Straits Times last Tuesday (Sept 14).

"When I got to the car, I saw that the baby was already out," said Dr Chow, an aesthetic doctor at the Clifford Clinic.

"Fortunately, I was quite experienced with this."

Twenty years ago, he had worked as a house officer at KK Women's and Children's Hospital where he assisted with delivering babies in the obstetrics department.

"Doctors in that department can deliver up to 30 babies in a night," he said. "Everything came flooding back to me."

His presence made all the difference, said Muhammad Annur Mohammad, 31, the father of the baby, who recounted: "We were so stressed because even though the baby was born, she was not crying.

"We really weren't sure what to do, or if she was in danger."

Checking the baby's vital signs, Dr Chow reassured Muhammad that as long as she was breathing well, she was fine. This allowed Muhammad to calm down.

Dr Chow then noticed that the mother, Mardiah Abdul Malek, 31, was dehydrated and asked his cyclist friends to assist by getting water for her.

One of them, Adrian Khoo, 38, said that Dr Chow was also invaluable in thwarting well-intentioned but ill-advised attempts to help.

Khoo said: "One of our friends actually offered to use their multi-tool to cut the umbilical cord!"

Dr Chow said that could have led to a dangerous infection for the mother.

"Thankfully, Dr Chow was there to make sure it didn't happen," said Khoo.

The ambulance came at around 6.30am and a paramedic snipped the umbilical cord. The couple, who have two older children aged four and one, went on their way to the hospital as planned, and the group dispersed.

A reunion was organised by The Straits Times on Friday at Muhammad's home for Dr Chow, Khoo and Addy Soon, 53, the private-hire driver, who called for help.

Dr Chow said: "We study so hard to become doctors, but we rarely have such life-changing moments.

"This was one such moment, and I'm really grateful for it."

Muhammad, a food delivery driver, said: "Never in my life did I think this would happen to me.

"But it is there in my daughter's birth certificate: born at the bus stop of Springleaf MRT."

Beyond the gratitude for this fortuitous encounter, everyone agreed that it was teamwork that made this operation a successful one.

Soon said: "It is like what I was taught growing up. We do good, we do well, we do together."