'I was glued to the spot': Elderly man attacked by otter along Kallang River

An elderly man's exercise session with his buddies at Upper Boon Keng Road was recently cut short when a group of otters emerged from the nearby Kallang River.

Little did he know that he would have a close encounter with one of the animals.

Upon spotting over 20 otters on May 13 morning, the man was glued to the spot.

"I seldom saw them all out in a group, so I stood still and waited for them to leave," the 77-year-old told Shin Min Daily News.

However, one of the adult otters soon scurried towards him and bit his left calf, causing him to cry out in pain.

"My friends were quite a distance away and couldn't come to my aid in time," he explained.

After the attack, the man went home where his wife helped to stop the bleeding and disinfect the wounds, he saw a doctor that afternoon and spent about $90 on medication.

The man, who has lived in the area for over 10 years, said he exercises every morning.

"The otters started appearing about two to three years ago, and used to move around in smaller groups of three or four," he told the Chinese daily.

Over the past year, however, the animals started to appear in larger groups and they're physically bigger, the man noted.

By sharing his encounter, he said he hopes to alert the authorities and also warn other residents of potential danger. 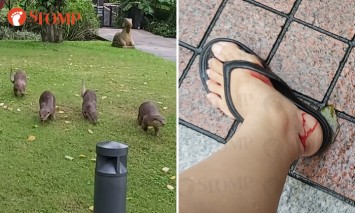 Last December, a woman recounted a 'terrifying experience' with the wild creatures during her visit to Gardens by the Bay.

She said that a few otters charged towards her and bit her foot while she was trying to film the animals on her mobile phone.

During an encounter with otters, members of the public should not touch, chase or corner these animals as it may frighten them, the National Parks Board said in an advisory. Instead, they should observe the otters from a distance.

They should also refrain from talking loudly or using flash photography as noise and light may provoke the creatures.