'I was so creeped out': Woman makes police report alleging SDA stalked her

He allegedly told her she looked pretty and asked for her days off and if she had a boyfriend. Soon after he started following her, and so traumatised was she that she eventually made a police report.

The 20-year-old woman, who wanted to be known only as Ms Isabel, works in a restaurant at Tampines 1, and speaking to The New Paper recently, she said: “He asked me for my contact number and whether I had an Instagram account. He also asked if I had any pretty friends I could introduce him to.”

She eventually gave him her number a month later.

“It was a huge regret of mine. I should have said no or at least given him a fake number so he would stop persisting,” she said.

Earlier this year, he allegedly took a photo of her and sent it to her.

“I was so creeped out. I told him not to take (any more) photos of me,” she said.

Later, Ms Isabel said the SDA followed her during her lunch breaks and tried to strike up conversations with her.

Read Also
When love turns into an obsession 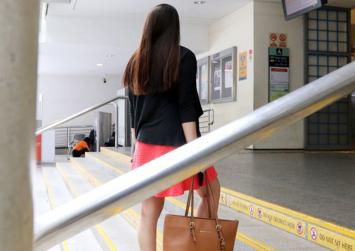 “The last straw was in late April (this year). When I was heading back to the restaurant after my toilet break, I saw him walking towards me from far away,” she said.

“I made sure to avoid eye contact, but he rushed towards me and blocked my path.

“He bent down so we were face to face, then said, ‘Cannot see me ah?’ I was so scared.”

Ms Isabel made the police report that same day.

In response to queries, the police confirmed that a report had been made.

A spokesman for the Ministry of Sustainability and the Environment (MSE) told TNP: “Our agencies will investigate feedback of inappropriate actions made against SDAs or enforcement officers (EO).

“Regarding the alleged incident that took place at Tampines 1, which was reported to the police, Enterprise Singapore is currently looking into the feedback.

“Appropriate action will be taken after the investigation is completed.”

Other women have also reached out to TNP about their experiences with SDAs and EOs.

A 22-year-old pre-school educator, who wanted to be known only as Ms Enaz, was entering Paya Lebar Quarter with her fiance on July 4 when an EO allegedly poked her.

Her fiance had made it clear that he had checked in for both of them.

“But when I walked in, the EO suddenly poked my left shoulder twice... I remember clearly that it was really hard and painful,” Ms Enaz said.

In a separate incident, a 21-year-old woman who declined to be named, said she was “catcalled” by an SDA while receiving her first vaccine dose at Chua Chu Kang Community Club in late June.

Both women did not report the incidents.

Members of the public who are unsure which agency an SDA or EO belongs to may provide their feedback to MSE, which will direct it to the respective agencies for a follow-up.

The MSE spokesman added that training is conducted for SDAs and EOs to prepare them for deployment.

“They are briefed on the safe distancing measures and safe management measures, code of conduct, and rules of engagement when interacting with members of public,” said the spokesman.

“They are also regularly updated on new measures and briefed by their team leaders and supervisors on their deployments.”

Said Ms Isabel: “Despite my experience, I know that the job of an SDA is not easy, especially having to deal with people who refuse to cooperate. Many of them have been putting themselves at risk by being front-line workers to ensure rules are followed.”