If she didn't have money I'd give the fruits to her, Serangoon hawker says after woman filmed stealing

She thought no one was looking, but her actions were clearly recorded on camera.

In CCTV footage, an elderly woman was seen pocketing several fruits from a stall at Blk 254A Serangoon Central Drive on May 30, when the stall assistant wasn't looking.

In an interview with 8World, the fruit stall owner said he first realised something was amiss when he found out the number of fruits left in his inventory did not match his sales figures. He was also a few hundred dollars short.

"Because of that, I spent the past few days observing the CCTV footage, and that's when I saw her," he said.

The woman, who appeared to be in her 60s, had pushed a grocery cart over to his stall and approached his stall assistant to enquire about the prices.

She then ambled to another side of the stall, and when the assistant turned away, shoved three persimmons into a plastic bag she was carrying. The senior quickly bagged another papaya and walked away with her cart before the assistant realised what had transpired.

Read Also
Picked up a bag with $10k that flew off car roof in Woodlands? Use money wisely, says owner 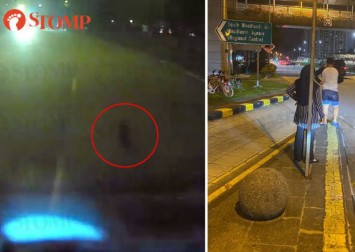 By the time the owner called and alerted his assistant, the woman had long left.

"If she didn't have money, she could have told us," the stall owner lamented, adding: "I'd give her some fruits to eat."

He has since reported the matter to the police and was told to continue keeping an eye out for the woman in case she appeared again.

While neither the fruit stall owner nor his assistant had seen the woman before, they believed she lived nearby as she had been pushing a grocery cart.

The police confirmed with AsiaOne that a report was lodged. Investigations are ongoing.