Singapore’s Ikhsan Fandi celebrates after scoring a goal against Malaysia, on March 26, 2022.

SINGAPORE – A record crowd in a pandemic witnessed a piece of history and some sublime mastery from Lions forward Ikhsan Fandi as the 22-year-old's brace propelled the Lions to a 2-1 victory over arch-rivals Malaysia in a Football Association of Singapore Tri-Nations Series friendly match on Saturday (March 26).

Ikhsan's remarkable winner at the National Stadium came in front of 14,896 spectators on a night where the Fandi family would jot down on their calendars as Ikhsan, Irfan and Ilhan all shared the pitch in a match for the first time.

The previous record crowd was 9,982 at the Lions' last outing - a 4-2 second-leg semi-final loss to Indonesia during the 2020 AFF Suzuki Cup at the same venue last December.

A jubilant Ikhsan, whose 76th-minute winner came five minutes after Ilhan’s introduction, said after the match: “The atmosphere was great. Scoring goals is my job but today was extra special because it was a derby match and a special moment for us as brothers.

“The moment I saw Ilhan coming in, I was really excited. You could see how much the goal meant to my brothers as well. We have talked about this moment since we were boys.”

Due to security checks at some entrances of the stadium, a sizeable group of spectators had yet to take their seats when Ikhsan scored the opening goal after a blistering counter-attack in the 30th minute.

Following Irfan's headed clearance in his own box to intercept a Safiq Rahim cross intended for an unmarked Akhyar Rashid, the Lions took just 12 seconds for Ikhsan to apply the finishing touch to a cross from Song Ui-young at the other end.

After the half-time break, the Malaysians came out in search of an equaliser and their quick start looked to be rewarded when Lions defender Safuwan Baharudin was adjudged to have brought down Safawi Rasid in the box. 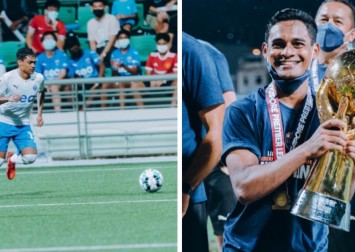 The Johor Darul Takzim winger however saw his spot kick crash off the crossbar, much to the delight of the Singapore supporters.

But it was a warning that was not heeded by the Lions.

In the 57th minute, the visitors equalised after some sloppy defending from the hosts. Shahdan Sulaiman's casual pass was intercepted in midfield before Akhyar's pass to Liridon Krasniqi caught out a flat-footed Irfan in the backline.

Krasniqi then slotted past Hassan Sunny for his first international goal.

But Ikhsan would have the last laugh when he scored a goal that saw the fans in red rise to their feet in the 76th minute.

Receiving the ball just outside the box, the BG Pathum forward ghosted past three Malaysian defenders and unleashed a fierce effort that left custodian Farizal Marlias with no chance.

It was Ikhsan's 13th goal in his 26th appearance for the Lions but it may be his most memorable yet given that it helped the Lions secure their fourth win against their Causeway rivals in their last 10 clashes.

Malaysia coach Kim Pan-gon, who led his side to a 2-0 win over the Philippines in his first match in charge on Wednesday, said: "It is difficult to say if Singapore deserved the win.

"I thought it was a good game from us. I feel sorry for the Malaysia fans but I am very proud of the players because I thought they played very well. I have zero complaints today with regards to our effort. We will use this opportunity to improve."

Similarly, Lions’ interim coach Nazri Nasir was very satisfied with his charges’ performance, saying: “We didn’t give up and every player gave their 100 per cent.”

On bringing Ilhan on as a substitute, he said: “It’s a moment that I know they won’t forget. I brought Ilhan on because I knew he would give his all for me. As a coach, I am proud of them.”

To Ilhan, the historic night meant a lot. He said: "This is the type of games you want to be a part of. Hopefully the future is bright for all of us. To represent the country together has been a dream for us and to do it in front of the home crowd and in a derby game was really special."

This was also interim coach Nazri's second win against Malaysia in as many matches. He had also been in charge in a previous temporary spell when the Lions last faced Malaysia – during the Airmarine Cup, a friendly quadrangular, that was held in Malaysia in 2019 where the Lions won 1-0.

The Lions will next face the Philippines on Tuesday (March 29).

Interim coach Nazri said that he wanted to carry on with the same philosophy and style of play that his predecessor Tatsuma Yoshida has instilled in the players and he followed through as he set up the Lions in a 3-4-1-2 formation – similar to the one the Lions employed as they bowed out in the Suzuki Cup semi-finals.

It is a set-up that suited the Lions once again especially in attack with Ikhsan benefiting most from the options around him.

Before he came off, Lions debutant Taufik Suparno combined well with Ikhsan and Song in the attacking third while fullbacks Zulqarnaen Suzliman and Nazrul Nazari were not afraid to bomb down the flanks.

The Lions are still in search for their next permanent coach but surely he would be looking on with a grin with the realisation that he may already have a settled system in place.