The day that Wuhan city went into lockdown saw people rushing to supermarkets to stock up on food and necessities. But since then, supermarkets and pharmacies have been well stocked.

While many scramble to get out of Wuhan with the recent outbreak of the novel coronavirus, Singaporean K. Ho is comfortable where he is.

Mr Ho, who has a Chinese wife and a three-year-old son, has lived in the city for the past 10 years. He told The Straits Times: "I'm comfortable here. In fact, it's quite cosy to stay home during winter."

The senior manager in the manufacturing industry has put himself and his family in self-quarantine at home ever since the city's lockdown on Jan 23.

Temperature takings are a part of their daily routine now. His wife also washes her hands and disinfects her coat whenever she heads out to the supermarket.

Despite all this, Mr Ho told the newspaper that life is still the same. "Well, except for the fact that you need to stay indoors and can't leave the city," he added.

He spends his time working from home or helping to coordinate with clients and colleagues who want to leave Wuhan.

Moreover, he said that unlike how social media and news platforms have reported, "The only time there was a commotion in the city was when news came of the lockdown."

"There was panic buying, and people snatched up most of the food at the supermarkets. But there wasn't any shoving and shouting," he said, noting that supermarkets were fully stocked the next day.

While Mr Ho has caught the flu, he says he is not worried it might be the coronavirus, stating that it is flu season right now.

His family was due to take a flight to Singapore on Jan 24 to celebrate Chinese New Year but received the news of the lockdown just the day before. 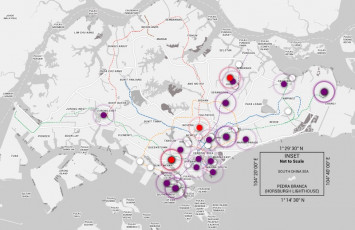 With just seven hours to get out of the city, the family decided to stay put, unlike many others.

"There were many uncertainties, what if we went to another city and were quarantined because we came from Wuhan?", he told The Straits Times, adding that it was even more difficult to travel with a toddler in tow.

Mr Ho also decided not to get on the Scoot flight that flew 92 Singaporeans out of Wuhan on Jan 30 after hearing that Chinese national spouses would not be allowed to board.

Hours after the flight took off, however, China's Foreign Ministry announced that Chinese nationals who are family members of foreign citizens would be allowed to board evacuation flights out of Wuhan.

Even so, Mr Ho who isn't too keen on the idea of being quarantined in Singapore still says he might not want to leave, saying: "It might be safer to stay indoors and avoid crowded places."

He remains confident that Wuhan will not run out of resources, telling The Straits Times: "I felt that many resources would be diverted to Wuhan because of the lockdown, so that's why I was assured that we would be all right."

#Wuhan virus #Outbreaks and Epidemics #In Case You Missed It #coronavirus