'I'm now out of time and options': Naiise founder files for bankruptcy as he winds up business

Naiise founder Dennis Tay said he had exhausted his savings and had also borrowed heavily from banks to keep the business afloat.

SINGAPORE - Multi-label retailer Naiise, once the biggest platform for local designers, is winding up.

It stopped operations late Wednesday night (April 14), after years of payment delays to its vendors.

"It has been an extremely difficult two years, and the last few weeks have been the darkest of my life," he wrote.

"I cannot apologise enough to the brand partners whose trust I've misplaced, and to whom monies are still due. I assure you all that the situation remains so because of an inability to pay, and not unwillingness."

Explaining, he said he had exhausted his savings and had also borrowed heavily from banks to keep the business afloat.

"I also signed personal guarantees for these loans, because as long as Naiise was still an ongoing concern, there was a chance that Naiise would be able to repay, however slowly."

But he ran out of time and options. Besides putting Naiise in liquidation, he will also be filing for personal bankruptcy.

Among the creditors are hundreds of vendors owed sums from a few hundred dollars to tens of thousands, banks and former employees.

In an e-mail to suppliers seen by The Straits Times, Mr Tay pointed to provisional liquidators from Deloitte and Touche for all future communications with Naiise.

Naiise's decision to liquidate comes after it announced the closure of its last store at Jewel Changi Airport on April 9.

The closure was the latest development in a series of cost-cutting measures including layoffs that Naiise had undertaken to weather the Covid-19 pandemic and weak retail sales.

However, that was not enough to keep the company afloat, with Naiise pulling out early of an agreement to manage the retail floor at Design Orchard. It withdrew in July last year, although it was supposed to run the retail showcase until at least January 2022. In the same month, it also shuttered its Paya Lebar Quarter outlet.

But Naiise's financial difficulties existed before Covid-19, with some vendors having complained of delayed payments for the goods they stock with Naiise, which sold them on a consignment basis, since 2016.

During this period, Naiise was expanding, having ventured into bricks-and-mortar stores in 2015, becoming known as the go-to place for quirky and Singapore-themed products like kueh-shaped cushions. 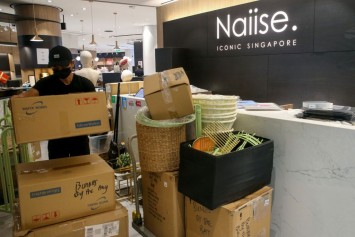 At the peak of its expansion in 2017, Naiise had employed about 100 employees, although ST understands that prior to the closure of Jewel Changi Airport's store, there were only two or three of them.

Ex-vendors were disappointed but not surprised that the retailer has made the decision to liquidate.

Mr Ong Yin Hao, co-founder of Nom Nom Plush, who is owed about $15,000 since he started selling with Naiise in 2015, said: "It doesn't look promising that we will get our money back. For Gallery & Co. and Robinsons, it was the vendors who lose out because they are unsecured creditors."

The Straits Times has contacted Deloitte for further comment.