'I'm still waiting for him to call me mum': Woman who left job to take care of 9-year-old son with rare Angelman syndrome

Chace, nine, who has Angelman Syndrome with his mum Chen Yuanqin

Chen Yuanqin is still waiting for her son Chace to call her 'mum'.

This hopeful mother, you see, has been waiting for a long nine years now.

In a YouTube video shared by Lianhe Zaobao on Sunday (May 8), the 37-year-old Singaporean quipped: "I've been telling him, 'the moment you call me mum, I'll immediately buy a flight ticket and bring you overseas'.

"I've been saying to him for a few years now, I'm still waiting. [I can only] hope."

Chace has Angelman syndrome, a condition that he was diagnosed with at 18-months-old about eight years ago.

Chen recalled: "I remember our family was out for dinner that day. When I saw the call from the neurologist, I felt very uneasy.

"When I was told [that Chace has Angelman syndrome], I went back home and cried with my husband."

Affecting one in 15,000 live births worldwide, Angelman syndrome causes intellectual disability, problems with speech and development and seizures, according to Mayo Clinic.

People with this rare genetic disorder are also prone to frequent smiling and laughing.

In the eight-minute clip, Chen said that she was a preschool teacher but she resigned three years ago, devoting herself to be a full-time caregiver to Chace while her husband works full-time to provide for the family.

This parenting journey has not been an easy one for the family.

There were more awkward encounters in public with Chace than feel-good stories of good Samaritans helping her, she added.

For example, there would be times commuters would be annoyed with Chace if he takes too long to board a bus.

"In the past, I would endure when others treat my son like that. Hold it in till my kids are asleep, then I would cry uncontrollably," said Chen.

But now, she's determined not to let anyone "bully her son".

"I must have the courage [to] bring him out. He deserves to see the world just like us," she said.

Chen has two other children, an 11-year-old boy and a newborn girl.

Read Also
Autistic child boards the wrong bus, gets 'rescued' by stranger who also has child with special needs 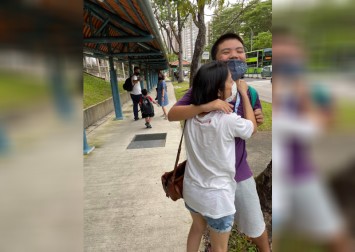 With Angelman syndrome, Chace faces difficulties in swallowing food properly and this has led to heartbreaking moments during mealtime, his mother shared.

Describing how she has to force-feed her son despite his shouts and screams, Chen said: "I don't want him to feel pain, but there's no choice.

"[Chace] doesn't want to open his mouth to eat (fearing he might choke on his food). If he's hungry, he'll start throwing tantrums all day, and it's quite pitiful since he doesn't know how to properly express himself."

Has Chen ever regretted her decision give up everything, including her full-time job, to take care of Chace?

"I ask myself that question many times," she said. "Even when I'm tired and frustrated with myself, I've always had no regrets. [Chace] brings us so much joy… When I'm upset, he would still keep on smiling. It is a reminder for us to smile too."

ALSO READ: Doctors dismissed her concerns, family convinced she was paranoid: One mum's journey on caring for her autistic twin daughters