'I'm in a tough spot': Over 100 passengers unable to board overbooked cruise ship

More than a hundred passengers were unable to board the ship at the Marina Bay Cruise Centre on Sept 4.

SINGAPORE - Some passengers from Singapore and Malaysia who were booked on cruise ship Genting Dream were unable to board after they were informed that the trip had been overbooked.

But more than a hundred passengers were unable to board the ship at the Marina Bay Cruise Centre here on Sunday.

Some passengers from Malaysia were also told the same on Monday, but it is not clear how many were affected.

The ship can accommodate 3,352 passengers.

A Resorts World Cruises (RWC) spokesman said that the Sunday sailing from Singapore was overbooked.

But she said that all affected guests will receive a full refund. They will also receive a complimentary cruise on the Genting Dream for sailings before April 28, 2023, subject to cabin availability.

In a notice sent to passengers in Malaysia seen by The Straits Times, RWC also said some guests with confirmed reservations will be affected and may be denied boarding at the Port Klang cruise terminal.

Malaysian Sophia Soo, 36, was one of those affected. She was supposed to sail from Port Klang on Monday with 48 other family members and friends.

The account executive said she received the news from a relative on Saturday night. Her relative, who had made the booking for the group, had received a call from RWC asking her to change the date of the booking as the cruise had been overbooked.

"The first thing that came to mind was how unbelievable this was when she told me the cruise had been overbooked," said Ms Soo.

She added that it was equally puzzling how passengers were informed only two days before departure.

The group initially wanted to go to Port Klang on Monday to try their luck, but decided against it after they saw the number of Facebook posts from other affected passengers. 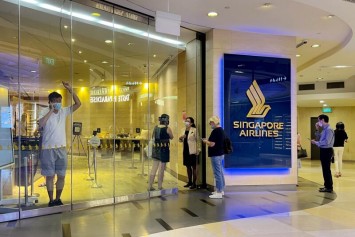 Ms Soo, who is from Kuala Lumpur, said the group was very disappointed,  and that if they had been informed earlier, they would have made plans for another trip.

Pictures published on Monday in Chinese-language daily Shin Min Daily News showed long queues at the Marina Bay Cruise Centre, while others were sitting around waiting with their luggage.

One of the affected passengers, who wanted to be known only as Mr Yang, told Shin Min that he had planned to take his two daughters on a cruise during the one-week school holidays, which ends on Sunday.

He said: "My daughters are disappointed. I plan to take them to Johor Bahru, but I'm worried about the traffic jam and not being able to book a hotel, and thus I'm in a tough spot."

RWC, one of the two cruise lines operating in Singapore, started cruises on June 15, after Genting Hong Kong collapsed due to financial troubles.