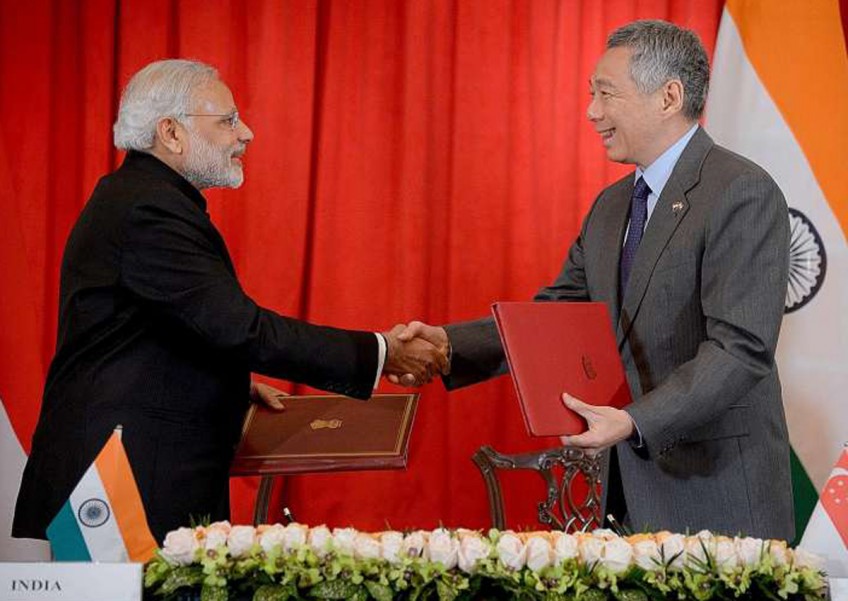 Indian Prime Minister Narendra Modi and Singapore PM Lee Hsien Loong at the signing of the strategic partnership agreement at the Istana yesterday.
The Straits Times

Singapore and India laid out an extensive road map for future ties, elevating the relationship to a strategic partnership that sees a peaceful Asia-Pacific region as an essential foundation for regional growth and development.

The partnership, together with other agreements unveiled yesterday, builds on defence ties that began with annual anti-submarine warfare exercises in 1994 and an economic relationship that was boosted in 2005 with the signing of the Comprehensive Economic Cooperation Agreement, the first such deal India signed with any nation.

It envisages political exchanges, enhanced defence and security co-operation, trade and investment, financial linkages, strengthened air connectivity and co-operation in multilateral forums. Among other fruits of the deal, Changi Airport could run two airports in India, and India may pick Singapore as a financial centre to launch rupee bonds. There could also be the joint development and co-production of weapons.

Earlier yesterday, Mr Modi was given a ceremonial welcome at the Istana as he arrived for a call on President Tony Tan Keng Yam, and meetings with Prime Minister Lee Hsien Loong and Emeritus Senior Minister Goh Chok Tong. Clad in grey, Mr Modi arrived to a light drizzle, seen as a good sign by Indians.

Mr Lee hosted lunch for Mr Modi after they witnessed the signing of nine bilateral documents and the launch of commemorative stamps to mark 50 years of bilateral ties.

Before lunch, Mr Lee gave his guest a copy of the Tamil Murasu edition announcing India's diplomatic recognition of Singapore, two days after it became an independent state. In turn, Mr Modi gave Mr Lee a reproduction of a map of Singapore dating back to 1849, when it was ruled from Kolkata as part of British India.

"We wish India well in its reforms and development," Mr Lee said. "We hope to develop our economic co-operation, air links and other fields of co-operation, and we are happy to support India's development where we can."

Mr Modi called Singapore "a major partner" in almost every area of priority in India's transformation. "We are also working closely - to keep our continent peaceful, our maritime routes secure and free, our citizens safe and our cyber networks protected," he said.

The strategic partnership will see regular high-level meetings at the defence minister level, and the continuation of joint military exercises across all three service arms.

With Mr Modi pushing infrastructure and smart cities, urban solutions - a key Singapore strength - have gained salience in the relationship.

Analysts said they see prospects of a renewed vigour in ties.

"The agreements elevate things to an all-embracing level," said Ambassador-at-Large Gopinath Pillai, chairman of the Institute of South Asian Studies. "Targets will be set higher and so, too, the level of monitoring. This augurs well, particularly in the defence relationship. Singapore is the only foreign country permitted by India to do continuous military training on its soil."

Mr Pillai, former chairman of Gateway Distriparks, one of the earliest Singapore companies to invest in India's infrastructure, applauded recent Indian moves to free up more sectors to foreign investors.

"This will encourage even cautious Singapore companies to participate," he said. "For instance, foreigners were allowed to build malls earlier. Now, you may own the mall as well. That's a significant change."

Mr Modi left for New Delhi last night after addressing a business convention and a function for expatriate Indians.

This article was first published on Nov 25, 2015.
Get a copy of The Straits Times or go to straitstimes.com for more stories.