The man was found lying motionless at the staircase landing.

SINGAPORE - A man found motionless at a staircase landing at Khoo Teck Puat Hospital on Thursday morning (April 23) later died from his injuries.

Police said in a statement that they were alerted to a case of unnatural death at the hospital at around 7.30am.

The man, an Indian national, 46, was found lying motionless at the staircase landing. He later died from his injuries.

Based on preliminary investigations, the police said they do not suspect foul play. They are investigating the case.

The Ministry of Health (MOH) confirmed that the man was a coronavirus patient.

In a statement on Thursday evening, the Ministry of Manpower (MOM) said it is deeply saddened by the man's death. The man's family members and employer, as well as the Indian High Commission in Singapore, have been informed, said the MOM.

The ministry said the man was a construction worker and had worked for the same employer since September 2009.

"Background checks do not reveal any complaints against the employer," the ministry added.

The man had lived in a factory-converted dormitory operated by the employer, which was last inspected on April 12.

"At the time, it housed nine workers, including the deceased, less than the approved capacity for factory-converted dormitories. The dormitory was found to be in an acceptable condition, including cleanliness and ventilation," said the MOM.

"The workers were sad but calm. They reported that they have been well taken care of by the employer," said MOM in its statement.

The workers also requested that the man's nephew, who is also employed by the same company, be allowed to pay his last respects.

The MOM said it is working with the MOH to facilitate the request.

In a recorded video interview, Mrs Teo encouraged any workers who need help or have any feedback to approach the MOM.

"We want to assure the workers once again that we are here to help them, and if there's anything at all, they can reach out to our officers. They have the numbers, and they know how to contact us," she said.

"This is a difficult time for all of them. We appreciate all of their contributions to Singapore and we are committed to looking after them. So whatever it is that they need, as long as they reach out to us, we will provide the support to them." 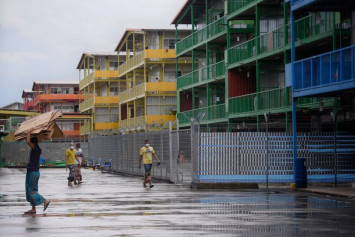 Mrs Teo also said that "we have assured (the workers) that they will be taken care of and we will help them to recover, and they should not hesitate to step forward to seek medical attention".

"We've also assured them that we will work with their employers to ensure that they continue to be paid their salaries and that they can send money home to provide for their families," she said.

On the death of the Indian worker, Mr Shanmugam said in Tamil in a recorded video interview that the police are investigating what happened, why it happened and whether the man had other medical issues.

The ministry is also working with the Hindu Endowments Board to undertake the necessary funeral arrangements for the man, as well as the Migrant Workers' Centre to provide support to his family.