SINGAPORE - Non-Constituency MP Leong Mun Wai's allegations that the Government's management of public expenditure has been deficient and his objections to the Singapore Sports Hub and SPH Media Trust (SMT) transactions are completely without basis, said Minister in the Prime Minister's Office Indranee Rajah on Monday.

Responding to a speech by the Progress Singapore Party NCMP at the end of Monday's Parliament session, Ms Indranee said the Government had explained the reasoning behind those decisions in detail many times - including in the House to Mr Leong — yet he continued to pursue the issue repeatedly.

"A charitable view is that Mr Leong genuinely does not understand the expenditure figures or the rationale that has been explained.

"But as he constantly reminds us and reminded us again today, he has 30 years' experience in business and financial management, so he shouldn't have any difficulty understanding them," she said.

"So, if objectively, the rationale and the figures are laid out, and if he does understand them, then there's only one other conclusion, which is that this can only be a deliberate and cynical attempt to stoke anxiety and disquiet, confuse Singaporeans, and damage the Government."

Ms Indranee, who is also the Second Minister for Finance, called on MPs and the public not to be misled by Mr Leong's assertions, and to "reject these bogus allegations and support the Government".

In his speech, Mr Leong said the deal to restructure Singapore Press Holdings (SPH) should have seen shareholders leave behind $900 million to support the media business, instead of having the Government foot this amount - a reference to the up to $180 million in public funding that the SMT will get over five years to invest in technology, talent and training.

Of the Sports Hub deal, Mr Leong said he believes the Government had been "overly generous" in estimating the fair open market value and remaining financial liabilities of the Sports Hub, and, if so, is paying more than it should to the Sports Hub private consortium. 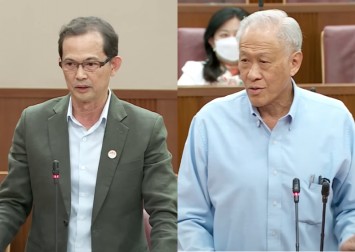 He said: "I am worried that the Government's behaviour in commercial deals can potentially lead to a waste of taxpayers' money."

Mr Leong charged that the money could have instead gone towards exempting Singaporeans from two years of the 2 percentage point goods and services tax increase, or to fund 10 years of assistance scheme ComCare cash payouts.

In response, Ms Indranee said Government support for the SMT ensures there continues to be a trusted and credible source of news that sees and reports through a Singaporean lens, while also preserving vernacular media that plays a crucial role in preserving mother tongues here.

She added that if the restructuring had involved an even higher contribution from shareholders to the SMT, they could have walked away and there would be no deal.

"If we were to do as he suggests, it will leave SPH media on a trajectory of decline and eventually result in a Singapore without a viable English language domestic media and without our Chinese, Malay and Tamil media, which is not in our national interests," she said.

With regard to the Sports Hub, Ms Indranee said that the Government had explained the basis for the termination sum of $1.5 billion, and that most of it was made up of capital expenditure that the Government would have had to bear in a traditional procurement model.

The full cost of termination is comparable to the Government's financial obligation if it had continued with the partnership and is, in other words, financially neutral, she added.

What Mr Leong had done was build up a "giant edifice of figures" before taking a "giant leap of illogic" to link the issues of the Sports Hub and SMT to completely unrelated issues, said Ms Indranee.

"Mr Leong's entire motion is an attempt to portray the Government as profligate and heedless of our expenses," she said. "Nothing could be further from the truth."

Ms Indranee said the Government had just steered the country through the Covid-19 pandemic without having to borrow, because it had been consistently careful and prudent with public funds.

This was despite repeated calls from the opposition, including Mr Leong, to save less and spend more, such as by using more of the reserves, she said.

"It is this side of the House that has repeatedly said 'no' to all these suggestions of wanton profligacy," she said.

In a clarification, Mr Leong asked whether the Government could say that the information he cited was not useful and that his allegations were without basis if it did not bother to answer the questions he had raised.

Ms Indranee said that Mr Leong's consistent approach each time the Government responds and explains a set of figures is to then bring up alternative scenarios.

She said: "And every time, the Government is required, according to Mr Leong, to respond to all of these, which have no bearing to the figures of the original transaction.

"That is not something which (is) a useful use of the Government's time to do."