'It's heartbreaking for us to witness this': Python in Boon Lay spits out missing pet cat

The snake was seen spitting out a cat along Boon Lay Drive.

When this woman shared a video of a cat's tragic death on social media, she did not expect to give its owner a heartbreaking closure for her missing pet.

Taking to Facebook on Thursday (June 16), Cynthia Ong shared a video of a python at the roadside along Boon Lay Drive.

In the minute-long video, the bloated reptile began vomiting up a cat carcass, much to the bewilderment of several passers-by.

After regurgitating its meal, the snake was seen slithering into a drain.

Speaking to AsiaOne on the same day, Ong shared that her mother saw the snake from afar while on her way home.

"We are owners of three cats and it's very heartbreaking for us to witness this," the 28-year-old marketing executive said, adding that she called the Animal and Veterinary Service (AVS) to pick up the dead cat.

Ong revealed that she initially shared videos of the incident on social media so that the "auntie cat feeders will be aware and will not go looking for the poor kitty".

But the owner of the cat reached out to her after the Facebook post went viral, Ong said.

According to the cat's owner, the feline "escaped from the toilet window" and she had been looking for the missing animal since Wednesday.

"But [she] couldn't locate it until I posted the videos."

Read Also
'Don't disturb nature': Netizens reproach woman after she saves duck from being eaten by snake in Bukit Timah 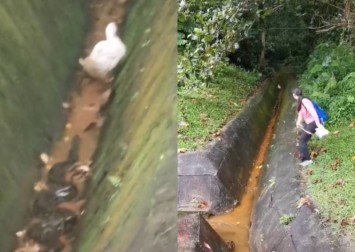 When AsiaOne requested to speak with the cat owner, Ong declined, explaining that the latter is "not in the right mind to talk about it".

AsiaOne has contacted AVS and the Animal Concerns Research and Education Society (Acres) for comment.

Other animals, both strays and pets, have fallen prey to hungry pythons over the years.

In April, celebrity chef Willin Low shared that his neighbour's pet chicken was eaten by a three-metre long python.

Last January, a couple who moved to Singapore were shocked to find a python devouring their pet Pomeranian outside their Holland Link condominium.

In 2019, Acres deputy chief executive Kalai Vanan, commented on a case of a python eating a community cat in Jurong West. He said that pythons mostly feed on rats in urban areas, but they also go for cats who frequent drains "when the opportunity arises".

Should members of the public come across a python, they should call the Acres Wildlife Rescue Centre at 9783 7782.