SINGAPORE - A maid who had an affair with her employer's husband and had consensual sex with him on two occasions later lied to the police, claiming that the man had raped her.

The court heard that Sumaini, who goes by only one name, made the false allegation hoping that it would help her return to Indonesia - something that her employer did not let her do.

The 29-year-old Indonesian was sentenced to 14 days' jail on Wednesday (May 15) after admitting that she had given false information to a police officer attached to the Serious Sexual Crime Branch of the Criminal Investigation Department.

Deputy Public Prosecutor Gregory Gan said that the man's wife alerted the police on Feb 7, stating that Sumaini had been "sexually abused". 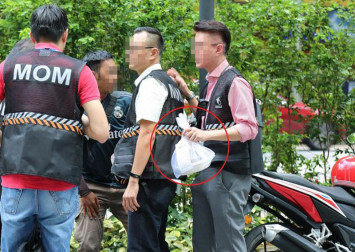 The woman accompanied Sumaini to Police Cantonment Complex for an interview, and the maid told a policeman at around 6pm that her employer's husband had raped her on Jan 15.

Officers arrested the man about 45 minutes later and he was taken to a lock-up at the complex.

The DPP said that after recording Sumaini's statement, the policeman checked her mobile phone and discovered text messages exchanged on Facebook Messenger between the maid and her employer's husband.

These messages included one from Sumaini stating that she missed the man, and suggested that they were in a relationship.

The policeman confronted Sumaini with the messages and she finally came clean at around 10pm. The man was released about an hour later.

The DPP told District Judge Luke Tan: "The accused admitted that she decided to tell the truth after being confronted with the Facebook messages.

"She said that she lied about the rape allegation because she wanted to return to Indonesia but (the man's wife) refused to allow her to do so."

On Wednesday, DPP Gan urged the judge to sentence Sumaini to between 10 days and two weeks' jail, stressing that an innocent man had to spend time in a lock-up because of her lies.

The maid, who was unrepresented, said that she was remorseful and had realised her mistake.

For giving false information to the police, she could have been jailed for up to a year and fined up to $5,000.