SINGAPORE - Two foreigners tried to leave Singapore with more than $400,000 hidden in their underpants after acting as agents in a scam business deal.

Frenchman David Weidmann, 37, and Romanian Iosif Kiss, 40, were arrested at Woodlands Checkpoint last September after the authorities were alerted to how the two men were involved in a bid to collect commission in a complex €7 million ($11 million) deal to sell a sea-going vessel which partly involved counterfeit cash.

On Monday (Aug 20), each man was jailed for a total of 44 months after both pleaded guilty to three charges of engaging in a conspiracy that facilitated criminal conduct.

Details of the boat were not given, but the court heard the scam was hatched early last year when the managing director of Singapore-based cruise and leisure firm Oceanic Group, Mr Daniel Chui Mun Yew, agreed to be a broker in the vessel's sale to a foreign buyer.

He met the buyer's representatives in Paris in March last year to discuss the terms and conditions of the deal, which would see commission to the representatives paid in cash.

Meanwhile, last August, Kiss and Weidmann - both in Paris - were offered a job by a man named "Boris" to act as the buyer's agents, and collect and handle the commission for the deal in Singapore. Each would be paid $5,000, and get €2,000 in total for their expenses while here.

On Aug 27, they came to Singapore and met Mr Chui at Oceanic Group's office.

Mr Chui then flew to Paris where he met one of the buyer's representatives on Sept 2 to collect €3.5 million - half of the total deposit for the vessel.

At the same time, Weidmann and Kiss were in Oceanic's Singapore office to wait for him to receive the money in France. Shortly after he got it, Mr Chui told his staff to give the two European men $1.5 million in commission. 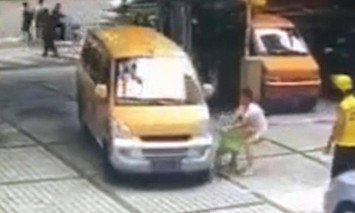 But 15 minutes after Mr Chui took the €3.5 million, he realised some of the cash was counterfeit. He alerted the Singapore office to recall the $1.5 million but the two men had fled.

"Boris" instructed the pair to give about just over $1 million to a Dutchman called Predrag Nikolic at City Square Mall, then each take $205,000 to Malaysia. After checking out of their hotel, the pair then handed about S$1.08 million in a suitcase to Nikolic.

They then got on a coach with the cash stashed in their underwear but the company had alerted the police, who in turn notified the Immigration and Checkpoints Authority.

Kiss and Weidmann were arrested at Woodlands Checkpoint on Sept 2.

Nikolic, 46, and and his French relative Dalida Nikolic, 36, were each jailed for two and a half years for their role in the scam in June. It is not known what happened to "Boris".