Baby Izz Fayyaz Zayani Ahmad suffered fatal head injuries after his head was pushed against the floorboard of a van in November 2019.

SINGAPORE - A 29-year-old man was found guilty on Wednesday (July 13) of murdering his then girlfriend's nine-month-old son in 2019, after the High Court rejected his defence that the baby's death was an accident.

Mohamed Aliff Mohamed Yusoff claimed that he was holding the baby, Izz Fayyaz Zayani Ahmad, in his arm and trying to close the door of his van when the baby fidgeted and fell head-first onto the floorboard of the van before falling on the ground.

However, High Court judge Mavis Chionh concluded that it was Aliff who had caused the fatal head injuries to Izz by pushing his head against the floorboard of the van.

Justice Chionh found that Aliff's claim of an accidental fall was not consistent with autopsy findings and medical opinion.

Senior consultant forensic pathologist Gilbert Lau found that the baby had died from bleeding in the brain as a result of traumatic injury.

Dr Lau testified that if Izz had indeed fallen with sufficient impact to have suffered the fatal internal injuries, he would have expected to find some laceration or linear abrasion of the skull - but he found no such thing.

In his statements to the police, Aliff vacillated between admitting to having pushed Izz's head against the floorboard of the van and claiming that Izz had hit his head after accidentally falling from his arm.

When Dr Lau was presented with the various versions of events, he testified that the version in which Aliff admitted to pushing Izz's head against the floorboard twice was most consistent with his autopsy findings.

Justice Chionh said Aliff's conduct after the incident supported the version that he had intentionally pushed Izz's head against the floorboard.

Aliff's then girlfriend, Ms Nadiah Abdul Jalil, said he had suggested to her that they pay someone to bury Izz and report him missing a year later. 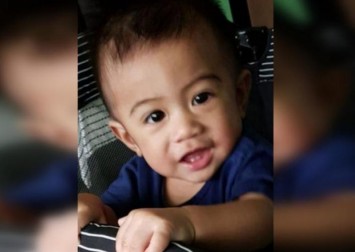 After parking at the NUH basement carpark, Aliff took time to brush his teeth and wipe his body; Ms Nadiah testified that he told her this was because he feared being placed in remand by the police.

She also testified that Aliff made her wait while he took time to dispose of his mobile phone before eventually taking her to the A&E department.

It showed Aliff needing 36 minutes to take Ms Nadiah, who was carrying Izz, to the A&E department after he reached the carpark.

He even took a detour en route to the A&E department, apparently to dispose of his mobile phone.

"The accused's post-incident behaviour was strikingly consistent with the behaviour of someone labouring under the guilty knowledge that Izz had died by his hand and fearful of being found out.

"It was not the behaviour of someone who was anxious to get Izz's injuries treated after seeing Izz hurt himself in an accidental fall," said Justice Chionh.

She added that Aliff was a "glib and disingenuous witness" who gave multiple differing versions of how the baby hurt his head in an accidental fall.

The case was adjourned for sentencing in August.

Aliff faces the death sentence or life imprisonment, but the court heard on Wednesday that the prosecution was not seeking the capital punishment.