Transport Minister Khaw Boon Wan paid a surprise visit to Methodist Girls' School to thank the pupils and told them about his "nasty fall".

SINGAPORE - Seven-year-old children were among the well-wishers who sent Transport Minister Khaw Boon Wan messages of encouragement when he was hospitalised for a fractured left arm.

In a Facebook post on Wednesday (March 27), Mr Khaw, 66, said the youngsters, Primary 1 pupils from Methodist Girls' School (MGS), had made personalised get-well cards for him.

"It shows that the students have learnt to have empathy and be caring," he added. 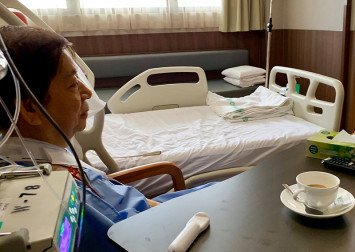 Many well-wishers had helped ease his suffering with prayers and kind words through cards, letters, social media posts and flowers while he was in pain in hospital, Mr Khaw said. He went through the messages and replied to them where possible.

In his post, the minister, who is still on medical leave, said that he made a surprise visit to MGS to thank the pupils and told them about his "nasty fall".

"I hope that they will bring back the lesson to their grandparents," Mr Khaw said. "In Singapore, one in three seniors above 65 years fall every year!"

Mr Khaw fractured his left arm at home after jumping out of bed to get to the toilet.

He was warded at the Singapore General Hospital for around two weeks and underwent a three-hour surgery on his injured arm.

It was fixed in place with a piece of titanium plate, he said. Doctors also believed Mr Khaw had fainted while getting up quickly that night, leading to his fall.