A Kim Jong Un lookalike said Friday he was questioned on arrival in Singapore ahead of a historic US-North Korea summit and told to stay away from sites linked to the event.

The Hong Kong-based impersonator, who goes by the name Howard X, has gained worldwide attention for his impressions of the North Korean leader in recent months.

He appeared at the Pyeongchang Winter Olympics alongside a Donald Trump lookalike, and the duo are set to take part in an alternative summit ahead of Tuesday's meeting between the US president and Kim.

But the Kim impersonator said that when he arrived at the city-state's Changi Airport he was stopped by an immigration officer and questioned for two hours. 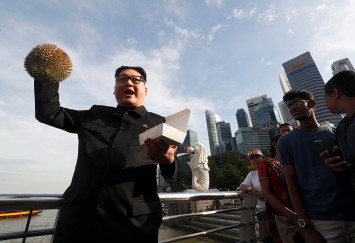 "They (searched) my bags and then told me that this is a very sensitive time to be in Singapore and that I should stay away from the Sentosa Island as well as the Shangri-La hotel in town," he said in a Facebook post.

Trump and Kim will hold their historic meeting on Sentosa, off Singapore's main island, while Trump will reportedly stay in the five-star Shangri-La.

The lookalike said he was asked if he had participated in Hong Kong's "Occupy Central" protest movement, to which he responded he had.

It is illegal to hold a protest in tightly-controlled Singapore without a police permit, except for in one corner of a downtown park.

He said he was finally allowed to enter Singapore after the grilling, and that he was now "prepared for some fun during this historical moment".