SINGAPORE - The Workers' Party's proposal for a universal minimum wage could leave workers and businesses worse off, with the exercise to determine the wage level devolving into a political auction, said NTUC deputy secretary-general Koh Poh Koon on Thursday (Oct 15).

He added that the Government's policies, particularly the Progressive Wage Model (PWM) that is mandatory for the cleaning, security and landscape sectors, already ensure that the vast majority of low-wage workers here bring home more than $1,300 a month, with data over the years indicating that it has also lifted the wages of such workers in other sectors.

His remarks in Parliament, during the debate on the Government's strategy to emerge stronger from the Covid-19 pandemic, come amid growing discussion on the minimum wage, with the WP calling for a universal minimum wage of $1,300 to be introduced across all sectors.

A universal minimum wage had been a key proposal in the WP's election manifesto for the July 10 General Election.

Addressing the WP's proposal, Dr Koh, who is also Senior Minister of State for Health, said that while a single minimum wage is "seemingly a quick way to raise the wages of workers", such a policy will also have drawbacks, as all policies do.

First is the danger of inadvertently putting workers at a disadvantage if the wage does not reflect the realities of each sector and is not sustainable or leads to unintended costs.

He said setting a wage level that is right for, say, cleaners and clerical staff alike, will be difficult, as each sector will have a different profile of low-wage workers and different concerns.

Meanwhile, an arbitrarily prescribed wage level is likely to end up being either not high enough to benefit all workers, or so high that companies in some sectors pass the costs back to consumers, cut back on hiring or go under, he added.

With no suitable basis by which to determine the wage, another danger is the inevitable politicisation of the exercise, he said.

Mr Singh had said in a Facebook post on Monday that a universal minimum wage is a "moral imperative" and an "act of national solidarity".

He warned of such a process gaining momentum and becoming detached from market realities, saying that the minimum wage would escalate beyond what companies can afford and imperil the jobs of low-wage workers, as has played out in other countries.

In response, Mr Singh and Associate Professor Lim said that it would be possible to avoid this if the minimum wage is set by an independent panel and is also based on statistics such as an average household's expenditure on basic necessities. 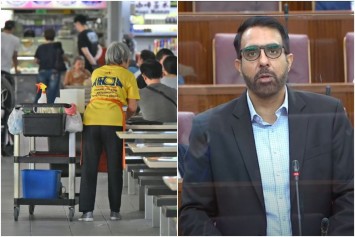 Another complication is whether a minimum wage introduced here should cover migrant workers such as foreign domestic workers, Dr Koh said, noting that there is an online petition "in honour of Mr Singh's name" calling for this.

"If a minimum wage is driven simply by a 'moral imperative', then the natural question to ask is whether it should include non-Singaporeans such as migrant workers, including our foreign domestic workers," added Dr Koh.

"Now, if businesses cannot bear the resulting costs, is that also a moral imperative to help our SMEs? This is a popular pertinent consideration at this time, when we are in a deep Covid-19 crisis. Many companies especially our SMEs, such as those in the construction sector, are suffering and not quite out of the woods."

Dr Koh suggested that introducing a minimum wage now was inconsistent with what WP MPs have been saying about helping SMEs amid the recession, and would be akin to adding "more frost to the snow in companies that are in deep winter right now".

He said: "So, I am not so much concerned by what Mr Singh and the WP is proposing for now, but by what it portends for the future - the possibility of a political auction that will price out lower-skilled workers, our brothers and sisters, and disadvantage our smaller enterprises, our smaller SMEs."

While more can and should be done to help the lowest paid in Singapore, he added, "the cure should not be worse than the problem it tries to solve".

Stating that the Government is not ideologically against having a minimum wage, Dr Koh said the PWM was effectively a minimum wage tied to a skills ladder, and takes a different approach to uplifting the incomes of low-wage workers.

He noted that under the PWM, the Government can work with each industry to address its specific concerns and challenges, so as to arrive at a consensus and basis that the different stakeholders can support.

With so many parties involved, it is much less likely for political auctioning to happen, he added. 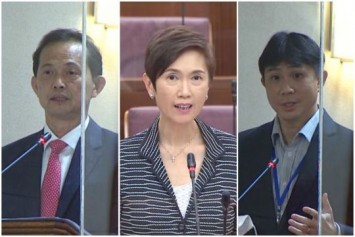 Addressing the criticism that the PWM covers only the cleaning, security and landscape sectors and not all low-wage workers, Dr Koh said the Government has committed to working with its tripartite partners to extend the PWM to all sectors. He added that the PWM has also helped lift wages in other sectors.

Among the 850,000 workers who are holding occupations traditionally deemed lower income, such as clerical support, service staff and tradesmen among others, the vast majority earns above $1,300 a month, Dr Koh said.

Figures from the Ministry of Manpower show that about 100,000 workers earn below $1,300, and after taking into account the Workfare Income Supplement wage top-ups, this number is reduced to 32,000.

Noting that this works out to about 1.7 per cent of the local workforce, Dr Koh added: "What the WP wants to achieve with the proposed minimum wage of $1,300, we have already achieved through PWM, Workfare and other policy measures."

To this, Mr Singh said that since the number was small, it should not be too difficult to ensure that these Singpaoreans are paid a livable wage of at least $1,300.

He added: "I would be prepared to work with the Senior Minister of State to ensure that we can reach out to these Singaporeans as quickly as the Government can, because I don't think it's acceptable that any Singaporean is earning below this number. It is simply not acceptable and if we can do something about it in double-quick time, lets do it."

Mr Perera added that implementing a minimum wage for such a small number of people would be unlikely to hurt SMEs.

Dr Koh said that the latest move to convene a workgroup on expanding PWM will further reduce this number.

He added that the NTUC had also submitted a proposal to the Government to form a Tripartite Cluster for the Waste Management Industry to introduce a PWM focusing on the waste collection subsectors.

He also suggested the setting up of a sectoral wage benchmark for sectors where there are currently no regulatory levers to mandate a PWM, as a first step towards creating more awareness of wages in these sectors, and urged the Government to consider using regulatory levers to encourage firms to join the voluntary PWM Mark scheme, which recognises firms that pay progressive wages.

"We should recognise what the Government and the tripartite partners have achieved in providing a genuine uplift to the workforce, especially our low-wage workers, and be willing to adopt new approaches," he said, adding that the Government remains open to new ideas.

Noting that a core mission of the People's Action Party government has always been to uplift lower-income Singaporeans, he said: "Taking care of our workers has been a critical part of our DNA. As a party we have achieved what few have done over the last six decades, but the task is never finished. It is something that we must and will keep working on."