Guests at the opening of a section of Jurong Lake Gardens at Rasau Walk on April 27, 2019

SINGAPORE - Children mimicked the actions of a Paradise Tree Snake - climbing a tree-like structure before gliding down slides - at a play area that lets them emulate the movements of different animals.

Adults wandered through a grassland area with 300,000 plants and tall grasses, which vaguely resembles something from the fictional Lord Of The Rings' Middle-earth.

These were some of the activities, including a carnival and the inaugural SGF Horticulture Show, lined up for visitors at Lakeside Garden to mark its official opening on Saturday (April 27).

The garden at 104 Yuan Ching Road revolves around the themes of "nature, play and the community", the National Parks Board (NParks) said in a statement. 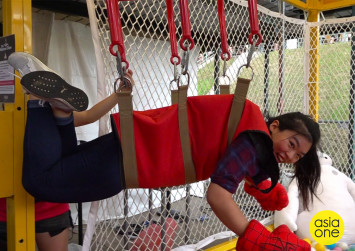 "The garden has been developed sensitively to retain the serenity of the area whilst incorporating spaces for the community and recreational needs."

Its opening marked the completion of the first phase of Jurong Lake Gardens, Singapore's first national gardens in the heartland.

At 53ha, Lakeside Garden makes up more than half of the 90ha Jurong Lake Gardens, the third national garden after the Singapore Botanic Gardens and Gardens by the Bay.

Lakeside Garden, the western portion of Jurong Lake Gardens, has features such as a restored freshwater swamp forest as well as grassland and wetland trails, where visitors may spy grey herons, oriental pied hornbills and smooth-coated otters.

At the 2.3ha Forest Ramble - which NParks described as the largest nature playgarden in the heartland - children can enjoy activities at 13 adventure stations, where they emulate the movements of native squirrels, crabs and other animals.

Nature playgardens - like the one that opened at HortPark in March - incorporate more natural elements, such as trees, dirt and sand, to encourage exploratory play.

Besides housing Singapore's biggest allotment garden, which has 300 plots, Lakeside Garden boasts PAssionWaVe @ Jurong Lake Gardens, by the People's Association (PA). It is the first waterfront facility in western Singapore, offering kayaking and pedal-boating, among other activities.

The SGF Horticulture Show, which is organised by NParks and will run until next Sunday, features exhibits and competitions with categories such as terrariums, succulents and carnivorous plants. It is an offshoot of the popular Singapore Garden Festival.

Those who visited the carnival got to try their hand at latte art, piloxing and other arts, food and lifestyle offerings.

At night, visitors were treated to a free concert with the theme "East Meets West", the 11th instalment of NParks' Rockestra concert series.

The initial reviews of Lakeside Garden were enthusiastic.

"There aren't many nature spaces in the west where children can play," he said.

NParks said the next phase would be to call the construction tender for the Chinese and Japanese Gardens in the central section of Jurong Lake Gardens, as well as the Garden Promenade in the eastern part.

These two remaining sections will open from 2021.

Also at the event was Deputy Prime Minister Tharman Shanmugaratnam, who is also the Coordinating Minister for Economic and Social Policies.

Mr Wong said in a speech that familiar landmarks like the seven-storey pagoda would be retained in the central section of Jurong Lake Gardens, and that a new Science Centre is being developed in the eastern part.

Read Also
#Joeyjios: Here's how you can spend 24 hours at Jewel Changi Airport 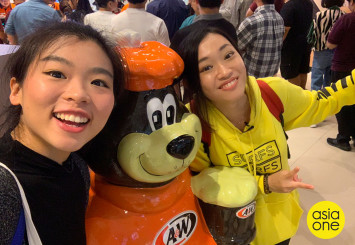 Plans for the development of Jurong Lake Gardens, envisioned as a people's garden, drew more than 32,000 suggestions from residents and stakeholders.

The feedback was incorporated into the design, said Mr Wong, who chairs the Jurong Lake District Steering Committee.

"Jurong Lake Gardens is an integral part of our development plans for Jurong Lake District," he said.

Mr Wong cited developments such as Jurong Gateway, which has two hospitals, offices and shopping malls, and two existing MRT lines, as well as the upcoming Jurong Region and Cross Island lines.

He said he was confident that Jurong Lake District would become "the largest commercial and regional centre outside the city".

Within this district, Jurong Lake Gardens would be "a beautiful green oasis", he added.