The ICA said it received an unprecedented number of applications, with one million passports either expired or expiring.

SINGAPORE - Singaporeans who apply for a new passport might need to wait for about a month, according to the latest update from the Immigration and Checkpoints Authority (ICA).

Its website on Monday (April 4) said: "Due to overwhelming passport applications, please expect a longer processing time of at least one month."

Successful applications were processed within one week, or longer during peak periods, in early March.

This comes as ICA last week said it received an unprecedented number of applications in March, with one million passports either expired or expiring, amid an easing of border restrictions and implementation of a Vaccinated Travel Framework.

Some 6,000 applications are reaching the authority each day, triple the pre-Covid-19 average two years ago of 2,000, it noted.

ICA advised Singaporeans who have plans to travel in the next few months and need to renew their passports to do so early. This can be done via its website.

The application fee is $70.

Once the passports are ready, applicants will be notified and they can make an appointment to collect them at any of the 27 designated post offices without paying additional fees.

Business analyst Annabel Tan, 26, had planned to go on a road trip to Johor Baru this weekend with friends but had to cancel it as her passport has expired.

“I thought passport renewal used to be quite fast, so I’m bummed that we have to push back plans,” she said, adding that she found out about the longer processing time on Monday. 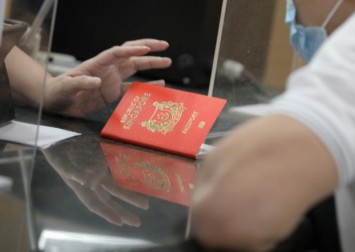 “Some of my friends are free to travel only in between the time frame of changing jobs, so we have to take many factors into account when postponing the trip.”

Ms Stephanie Sim, 28, who works in finance, planned to fly to Bangkok with friends on April 14. As her passport expires that day, she applied to renew it on March 30, thinking the waiting time will be around one week.

After hearing about the longer waiting time on Monday, she said: “Luckily we haven’t booked anything yet. My travel plans are rather impromptu, so I don't have much expectations of whether my passport will be renewed in time.

ICA added that there is no need for Singaporeans who have no plans to travel overseas for the next six months to renew their passports.

The Singapore passport is not a mandatory identity document, and there is no penalty for not renewing passports that have expired, it said.

As of April 1, fully vaccinated Singaporeans can travel freely between Singapore and Malaysia by land, including by driving and on public transport, without testing or quarantine.