Weighing in on the matter on Sunday (June 21), Mr Shanmugam noted that Dr Tan had simply put out various posts by Mr Alfian. The minister then summarised what he said was the poet's stance.

"(Mr Alfian) would like Singapore to merge with Malaysia... he dislikes Mr Lee Kuan Yew intensely and loves Dr Mahathir," he said during a visit to Yishun Link.

"He takes Malaysia's side when the Malaysian government's vessels are in Singapore waters and in a very tense stand-off on territorial issues as well as air issues... and says Singaporeans are jingoistic... This is a free country, he's entitled to his views and I think most Singaporeans know him for what he is." 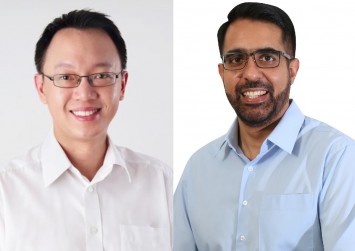 He added: "But when Mr Pritam Singh as leader of the opposition stands up in Parliament and supports Mr Alfian Sa'at and says he is a loving critic of Singapore, then I think we are entitled to ask in a healthy democracy, which side do you stand on?"

Mr Shanmugam, who is the anchor minister of Nee Soon GRC, noted that under former WP chief Low Thia Khiang, it was very clear that while the PAP and WP might take different positions on policies within Singapore, "politics stops at the boundaries".

"You never take another country's side against Singapore," he added.

Dr Tan's note was thus a very serious one, which said this was what Mr Low and the WP used to be like, but does that continue to be the position, Mr Shanmugam said.

Dr Tan had criticised Mr Singh for speaking in support of Mr Alfian in Parliament during the Fortitude Budget debate earlier this month, in an article published on the People's Action Party website on Friday.

He said Mr Alfian has consistently praised Malaysia and went on to cite several Facebook posts by the playwright. These include a 2018 post made when both countries were embroiled in a maritime dispute after Malaysian vessels intruded into Singapore waters.

Mr Singh, who is an MP for Aljunied GRC, shared Dr Tan's article in a Facebook post on Friday. In a brief comment accompanying the post, Mr Singh said: "A loving critic. A son of Singapore. Not perfect. As imperfect as you and me Dr Tan, maybe more, maybe less."

A loving critic. A son of Singapore. Not perfect. As imperfect as you and me Dr Tan, maybe more, maybe less.

On Sunday, Mr Shanmugam said Mr Singh did not make clear his position on the matter in his response.

The Straits Times has contacted Mr Singh for comment.

Mr Alfian on Saturday made another Facebook post responding to Dr Tan's assertions, in which he said he was anxious about military escalation between Singapore and Malaysia, had been critical of Tun Dr Mahathir Mohamad, and had never endorsed Malaysia's Bumiputera policies nor wished them to be implemented here.

There has been support online in some quarters for Mr Alfian and Mr Singh, with some commentators accusing Dr Tan of "gutter politics" and "character assassination".

Referring to the criticism of Dr Tan, Mr Shanmugam said a "small group of people" have "almost a Pavlovian response" to things said by the PAP or the Government, and that is "sheer hypocrisy".

He added that PAP ministers and MPs are also subject to personal attacks all the time. "These people who now rise up to complain about Dr Tan Wu Meng never breathed a word about that."

Mr Shanmugam said: "I think people ought to go look at the posts... I can understand if you don't read the post and just read what other people say, you will make that mistake.

"And there are people who, legitimately having read Dr Tan's post, will feel, 'Eh, why does he have to say this?' I can understand, that's legitimate. In a free society, you're entitled to take that view too."