Mohammad Rosli Abdul Rahim fatally stabbed his flatmate in 2017 during a quarrel over rent.

SINGAPORE - A 52-year-old man who fatally stabbed his flatmate in their Teck Whye Crescent unit was sentenced to life imprisonment for murder on Thursday (Jan 13).

Mohammad Rosli Abdul Rahim had stabbed 35-year-old Mohammad Roslan Zaini in the heart in the early hours of Aug 16, 2017, during a quarrel over rent.

He was found guilty of murder in November last year after the High Court rejected his defence that he had accidentally inflicted the fatal wound.

Rosli's lawyer, Mr Eugene Thuraisingam, told The Straits Times that his client is appealing against the court’s rejection of Rosli's defence that he lost self-control because the victim had uttered vulgarities insulting his mother.

The court heard that Rosli had been homeless and sleeping in the rough around November 2016, but found a roof over his head after Mr Roslan approached him to split the rent on the flat.

In August 2017, Rosli began to suspect that his co-tenant was overcharging him for his share of the rent.

At about 4am on Aug 16, 2017, Rosli and Mr Roslan were watching movies in the flat with two mutual acquaintances when they began arguing over money. 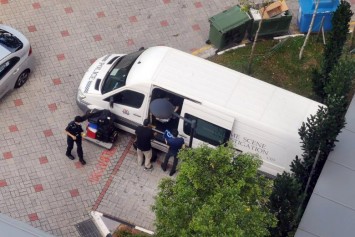 Angered by the victim's words, Rosli took a knife from the kitchen and stabbed Mr Roslan in the heart.

The two visitors fled the unit on witnessing the attack.

The victim also escaped, struggling down the stairs before collapsing on a grass patch. He was pronounced dead at the scene by paramedics.

During Rosli's trial, he claimed that during a chaotic melee in the poorly lit flat, he "accidentally poked" the victim's chest when he was swinging the knife downwards because the victim moved forward.

However, the judge said it was clear from the forensic evidence and the testimony of one eyewitness that the fatal stab wound was inflicted by an inward thrust.

A forensic pathologist had testified that it was not possible for the fatal stab wound to be caused by a slashing motion, the judge noted.