SINGAPORE - The central city was transformed on Thursday (May 7) night when around 30 landmarks such as Marina Bay Sands and the Esplanade were lit up in varying shades of blue as part of the #SeeItBlue movement. 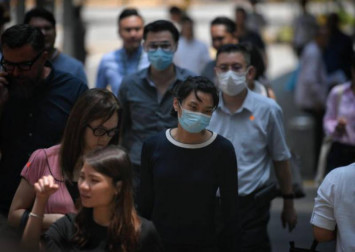 The initiative is a mark of solidarity with the global #MakeItBlue movement, which wants cities to light up in blue to celebrate the efforts of front-line workers such as cleaners, public transport drivers and food delivery.

The movement started in Britain and has now spread to 17 other countries, such as the United States, France, Australia and Japan.

The #SeeItBlue movement staged its inaugural event here on Thursday, aiming to put the spotlight on mental health.

Participating venues included The Arts House and Cavenagh Bridge, Gardens by the Bay and the One Raffles Place and Marina Bay Financial Centre office blocks.

They will light up for varying periods from 8pm every Thursday until the circuit breaker ends on June 1.

"The battle with Covid-19 is not just a physical or medical challenge but also a mental one," said Ms Tjin Lee, founder of marketing communications and events companies Mercury PR and Mercury Live.

"#SeeItBlue seeks to encourage people to see and acknowledge the importance of mental well-being during these unprecedented times."

💡 Together with about 30 iconic landmarks in Singapore, we will be lighting up five of our bridges in support of...

Posted by Land Transport Authority – We Keep Your World Moving on Wednesday, May 6, 2020

Mr Ravi Sivalingam, head of operational support and services at The Esplanade, said the building's LED lighting system allows a variety of colours and effects to be programmed on the domes.

"It is important that we show our support and appreciation for all those who have stepped up and responded to this pandemic," he added.

The Land Transport Authority had said on Wednesday that it would light up Helix, Elgin, Cavenagh, Coleman and Clemenceau bridges on Thursday in support of the movement.

"Since the implementation of circuit breaker measures, many of us have been staying at home, making it even more critical to safeguard our mental well-being during this period," it said in a Facebook post.