Travellers headed to Malaysia queue to enter Woodlands Checkpoint in Singapore on 14 April 2022.

SINGAPORE - Snaking queues of people heading to Malaysia are back at the Woodlands Checkpoint on Thursday (April 14), ahead of the first long weekend after land borders fully reopened.

Hundreds of people were in the queue when The Straits Times visited the checkpoint at about 8pm.

Policemen were deployed to direct people as the crowds and the congestion made it difficult for some who wished to join the queue.

Among those in the line was a Polish man who wanted to be known only as Mr Gregory.

The 42-year-old engineer, who has been based in Singapore for 2½ years, is taking advantage of the Good Friday public holiday to visit Legoland Malaysia in Johor Baru with his wife and two children. They plan to return to Singapore on Friday.

Mr Gregory said: "Our colleagues and friends told us that the queue could be quite long as it is the eve of a long weekend, but we decided to make the trip anyway. 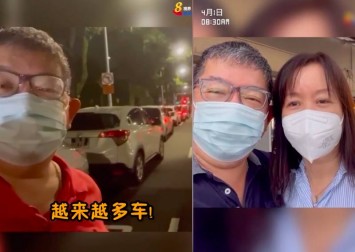 "I guess this queue is part of the adventure."

The Immigration and Checkpoints Authority (ICA) said that as at 5pm on Thursday, 662,900 people have departed Singapore via the Causeway and the Second Link since April 1, after quarantine- and testing-free travel from Singapore to Malaysia was made possible.

For Mr Zali Aziz, 37, Thursday's queues brought back memories of how it was in pre-Covid-19 days, when crowds of people would wait to enter the checkpoint on the eve of long weekends.

Thursday's trip will already be the Malaysian technician's second one home to visit his wife and seven-year-old daughter since April 1. Prior to that, he had not seen his family for about two years.

He estimated an hour of wait time based on the queue, but added that he does not mind the wait as he expected many Singaporeans would be heading to JB for a short trip during the holiday.

"Once you clear customs, it will be very fast," said Mr Zali.

Those who drove had a shorter wait - an ST team managed to get through in about 30 minutes, including waiting time.

Most of the cars and motorcycles travelling towards JB were observed to have Singaporean licence plates.

Among the Singaporeans making their way to Malaysia was a 40-year-old application analyst, who wanted to be known only as Ms Lee.

She was heading to JB with three of her friends and was queueing opposite Marsiling MRT station for a bus to the Woodlands Checkpoint at about 6.30pm.

She was a regular visitor to JB in pre-pandemic days and is looking forward to visiting some of her old haunts such as the Johor Bahru City Square mall for a weekend of shopping and eating before returning home on Sunday. It will also be a weekend of reunions with some of her Malaysian friends.

There was a queue of about 70 people at the bus stop in Marsiling but that did not deter Ms Lee from making her first trip across the border since the pandemic hit.

She said: "I don't really care about the long waiting times. I am looking forward to the cheaper prices in Malaysia as Singapore has become so expensive."