Look up! Flying taxis to be tested in Singapore skies mid-2019

The flight tests are designed to validate and verify the ability of German aviation start-up Volocopter's air taxis to operate in Singapore's urban environment.

SINGAPORE - The Jetsons zoomed around in flying cars in a cartoon series which featured life in 2062.

But those in Singapore may not have to wait that long to see one up close with German aviation start-up Volocopter announcing it will perform a series of urban flight tests of its air taxis in the Republic in the second half of 2019.

The flight tests are designed to validate and verify the ability of Volocopter's electric vertical take-off and landing (eVTOL) vehicles to operate in Singapore's urban environment.

The firm's air taxi resembles a helicopter, but is based on drone technology and can fly two people for about 30km.

The Volocopter is designed specifically for inner city missions and can carry 160kg.

In a statement on Wednesday (Oct 18), the company said the tests, which will culminate in public demo flights, are supported by the Ministry of Transport, Economic Development Board and Civil Aviation Authority of Singapore (CAAS). 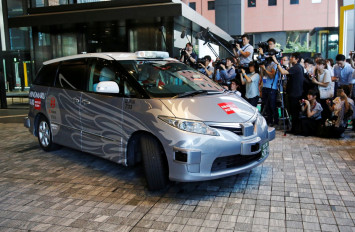 CAAS director of aviation industry Ho Yuen Sang was quoted as saying there is potential for air taxis to transform mobility and logistics in urban cities.

Volocopter, he added, is at the forefront of such new and innovative technology in the aviation industry.

"CAAS is pleased to work together with Volocopter to study the technical capabilities and develop appropriate operational guidelines to facilitate such trials in Singapore."

The German company said it will be setting up a product design and engineering team in Singapore to support its expansion plans.

In response to queries from The Straits Times, Volocopter said the trials will focus on its vehicle's capabilities to perform flights under local conditions.

It will work with government agencies to determine the right testing facilities and locations.

The Volocopter can be flown with a pilot, or unmanned via remote control or autonomously.

For the flight tests in Singapore, the company will work with CAAS to decide which flight mode is the best for conditions here.

It was previously reported that Volocopter is seeking to partner real estate developers and mobility providers to establish infrastructure that can support flight testing.

A Volocopter spokesman said while its air taxis are currently not being used commercially anywhere, it is focusing on "achieving commercial certification to operate as air taxis".

"We expect the first commercial air taxi routes to open in three to five years. We are in discussions with cities around the world including some in Germany."

"However, at this point, we cannot make an estimation where the first route will open," said the spokesman.

In September last year, Volocopter performed a public unmanned test flight in Dubai, where it partnered with the country's Roads and Transport Authority.

This article was first publishd in The Straits Times. Permission required for reproduction.