Identifying himself as fictional characters such as "Lord Voldemort", a disgruntled insurance agent sent anonymous threatening messages to some clients after they cancelled policies they had bought from him.

Myanmar national Ye Lin Myint, 36, who had worked for Prudential, was also unhappy as others had failed to turn up for their scheduled appointments.

Ye Lin Myint pleaded guilty to five counts of criminal intimidation and eight harassment charges. Thirty other charges for similar offences were considered during sentencing. The court heard that he targeted 33 people in all, including his former clients and their neighbours.

He sent them threatening letters and e-mails in August and September 2017. 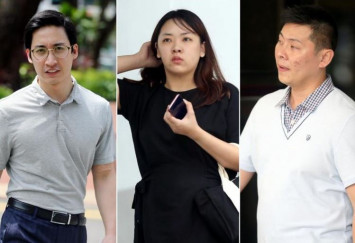 In July 2017, he used his wife's laptop and went on a portal called Protonmail to create e-mail accounts under the names "Lord Voldemort" - boy wizard Harry Potter's nemesis - and "Dr Bruce Banner" who is the Hulk's alter ego.

Deputy Public Prosecutor Thiagesh Sukumaran said that with Protonmail, netizens do not need to key in their personal information to create e-mail accounts.

He added that Protonmail also does not keep any IP logs, which can be linked to the e-mail accounts.

These measures allowed Ye Lin Myint to remain anonymous when he sent the e-mails, the court heard.

He also created a bitcoin wallet, which he linked to the Lord Voldemort account to receive and transfer the cryptocurrency.

The DPP said: "After he created the Protonmail accounts, the accused also created letters and e-mails that were addressed to his clients, which threatened that harm would befall his clients and their families if one bitcoin was not transferred to the accused's bitcoin wallet. He signed off the letters and e-mails with the pseudonym Lord Voldemort."

At the time of the offences, one bitcoin was equivalent to about $6,600. He later decided to harass his victims' neighbours to exert additional pressure on them.

His victims alerted the police, and officers arrested him after they conducted an extensive investigation.

The Straits Times understands that none of his victims transferred bitcoins to him. He is out on a bail of $15,000 and was ordered to surrender himself at the State Courts on Feb 15 to begin serving his sentence.