Lorry driver jailed for opening door into path of bicycle

A lorry driver who opened the door of his vehicle without checking, causing a man on a power-assisted bicycle (PAB) to slam into it, was jailed for a week yesterday.

Loh Kuan Meng, 59, was convicted of one count of causing grievous hurt by a negligent act that endangered human life and the personal safety of others.

On Feb 2 last year, Loh was driving along Yishun Ring Road towards Yishun Avenue 2. At about 6am, he parked his lorry close to the left-side kerb on the two-way road.

At the same time, Mr Lim Kim Quay, 75, was cycling his PAB towards the right side of the lorry to overtake it. 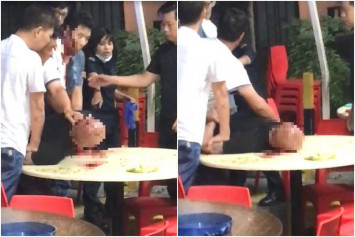 Just before he reached the driver's side, Loh suddenly opened the door into Mr Lim's path without checking.

Mr Lim collided into the door and fell onto the road.

He suffered haemorrhages, abrasions on his shoulders and legs, among other injuries, and underwent four operations.

He was warded at Khoo Teck Puat Hospital from February to April last year.

He was then transferred to Yishun Community Hospital while waiting for a place at a nursing home as he was uncommunicative, bedbound, and needed a feeding tube.

Mr Lim is now warded at All Saints Home, a nursing home. There was no damage to the lorry, while the bicycle sustained scratches to the seat, handle bars and side mirror.

There were also no mechanical faults detected on both vehicles before the accident, and the PAB had a headlamp fitted at the time of the accident, the court heard.

Another charge of parking along unbroken double yellow lines was taken into consideration.