Singapore has reported a total of 57,532 coronavirus cases so far.

SINGAPORE - There were 18 new coronavirus cases confirmed as at Thursday noon (Sept 17), taking Singapore's total to 57,532.

This is the lowest daily figure since March 16, which had 17 cases.

Thursday's new cases included one community case who is a work pass holder, said the Ministry of Health (MOH).

There were also two imported cases, who had been placed on stay-home notices upon arrival in Singapore.

The malls were added to a list of places visited by community cases during their infectious period. The visits were made on Sunday.

Two new cases in the community were reported on Wednesday.

Both patients are work permit holders, and were detected from rostered routine testing of workers in the construction, marine and process sectors who stay outside dormitories. They tested positive on Tuesday.

Two new imported cases were also announced on Wednesday. Both arrived from India. One is a 50-year-old Singaporean woman who returned last Saturday and tested positive on Wednesday.

The other is a two-year-old boy, an Indian national and a long-term visit pass holder, who tested positive on Tuesday. He arrived here on Sept 3.

Both patients were placed on 14-day stay-home notices upon arrival and were tested while serving their notices at dedicated facilities.

Migrant workers in dormitories made up the remaining 23 of the 27 new patients announced on Wednesday. 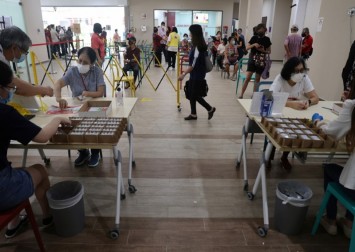 Investigations by laboratory experts and an expert panel assessed that his first test result was a false-positive one, said MOH.

It added that all necessary public health actions were taken earlier and neither the patient nor his contacts were exposed to the risk of infection due to the initial classification.

The average number of new daily cases in the community in a week has decreased from two cases two weeks ago to one in the past week.

The number of unlinked cases in the community in a week has also decreased from a daily average of one case to less than one over the same period.

With 71 patients discharged on Wednesday, 56,940 have fully recovered from the disease.

A total of 42 patients remained in hospital on Wednesday, with none in intensive care, and 490 were recuperating in community facilities.

Singapore has had 27 deaths from Covid-19 complications, while 15 who tested positive have died of other causes.

Globally, the virus outbreak, which began in December last year, has infected more than 30 million people. More than 944,000 people have died.