Lucky Plaza store owner fined $30k for being in possession of unregistered contraceptives, painkillers and antibiotics

SINGAPORE - A grocery store in Lucky Plaza was found to be illegally peddling contraceptives, painkillers and antibiotics.

Store owner Valdez Ana Rubirosa Manalo, 47, a Filipino, was fined $30,000 on Thursday (April 11). She will spend 12 weeks behind bars if she fails to pay the amount.

The Singapore permanent resident, who owns Cabalen Grocery on the fourth storey of the shopping mall in Orchard Road, pleaded guilty last month to six counts of being in possession of unregistered therapeutic products for the purpose of supplying them to others.

Court documents showed that Cabalen Grocery had earlier been fined $4,000 for offences under the Poisons Act after being found in 2016 for having in possession for sale products such as sibutramine - an appetite suppressant - and clobetasol propionate, which is used to treat various skin disorders including eczema and psoriasis.

Sales assistant Tejana Marilyn Nillas, 34, admitted that the products were kept in the store so that they could be supplied to customers.

Read Also
Illegal medicines worth $40,000, including 100 litres of cough syrup, seized by HSA 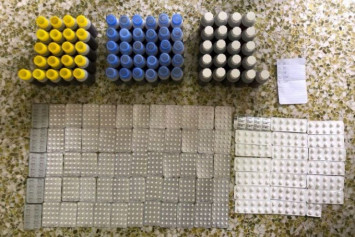 Investigations revealed that a woman known only as "Tita", which means aunt in Filipino, went to Cabalen Grocery in January last year to sell an assortment of pills, capsules and tablets.

Manalo agreed to buy them for $300 in total as she occasionally had customers who asked for them.

Ms Tan said: "Even though the accused knew that selling such products was illegal, the accused continued to engage in the offences because she wanted additional income."

She added that among the products were more than 1,000 pills of oral contraceptives including Trust Ethinyl Estradiol + Levonorgestrel + Ferrous Fumarate.

The court heard that the drug's side effects include abdominal pain and nausea.

The prosecutor added that based on Manalo's selling price, the total value of the oral contraceptives was more than $200.

On Thursday, Manalo who was unrepresented, pleaded for a "lower penalty". She told the court: "I know I did wrong... I'm asking for forgiveness."

For each count of being in possession of unregistered therapeutic products for the purpose of supplying them to others, offenders can be jailed for up to two years and fined up to $50,000.