SINGAPORE - Hundreds of hopeful stargazers flocked to Marina South Pier early on Saturday morning (July 28) to catch the cosmic event of the century - the longest total lunar eclipse and the alignment of Mars with the Earth and Sun.

In a community-led event organised by the Maritime and Port Authority of Singapore and the local astronomy community SingAstro, members of the public were invited to watch the celestial events at Marina South Pier's roof garden throughout the night.

More than 16 telescopes were provided by SingAstro for the public to freely see these heavenly bodies, which also included the planets Saturn, Venus and Jupiter.

SingAstro member Chin Zong Yang, 26, said, ahead of the event: "Tonight's lunar eclipse will be special because it is the longest of the century - lasting one hour and 43 minutes - in addition to the Mars opposition."

The Mars opposition occurs when the Sun, Earth and Mars align in a straight line. At 57 million kilometres from Earth, this means that Mars, at the point of its orbit, is closest to our planet.

Read Also
Total lunar eclipse on July 28: Here's all you need to know 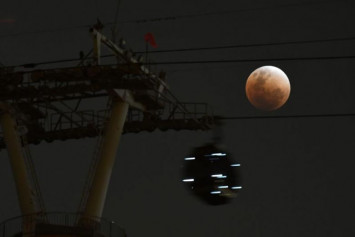 "But for the two events to coincide on the same day," Mr Chin added. "I feel very lucky and excited to facilitate the viewing of this rare event for the public."

At 1.13am, the moon began to pass through the Earth's shadow, darkening gradually, although the darkening was not apparent to the naked eye.

But at 3.30am, a "blood moon" started to appear. As the moon entered the Earth's umbra, the darkest part of Earth's shadow, its rocky surface started to turn coppery-red.

Twelve students from the astronomy club of the School of Science and Technology, Singapore, took turns managing their telescope to capture the moon's transformation in a video live stream for their school's YouTube channel.

The club's 14-year-old vice-president, Yee Jia Chen, said he and his team were very excited to capture a "very rare occasion".

Mr Joakim Michael Mathews, 32, a member of SingAstro who has been an avid skywatcher for more than a decade, had his fingers crossed and said: "I hope for clear skies tonight."

Thankfully, the skies remained clear and cooperative, and many were able to catch the blood moon at its reddest during its maximum eclipse at 4.20am.

Mr Remus Chua, founder of SingAstro, said seeing such a number of people viewing the eclipse till late was "surreal and amazing".

"This is the first time that we have an astronomy outreach where it extends into the dawn hours. It's amazing that the crowd had stayed up to experience the longest lunar eclipse...

"With these two celestial events and with the good spirit of the astronomy community, I really think this has been a successful event."