Some 'super troopers' stormed a HDB block at Clementi on Saturday (July 16), providing neighbours with quite a show.

But hold the applause. Instead of the elite special forces, the stars of the video appear to be a troop of long-tailed macaques.

The slightly over two minute clip which was posted to the Singapore Road Accident Facebook page on Saturday (July 16) went viral almost overnight, drawing close to 160,000 views and more than 400 comments.

While the video seemed to show two macaques scaling a wall, the dramatic scene a few seconds in showed several monkeys [we counted five] emerging from the kitchen window of a fifth floor unit.

One of the monkeys could be seen holding a piece of food in its mouth.

The nimble primates then proceeded to shimmy down the pillar with the finesse of special ops personnel, sans safety equipment. At one point, seven macaques could be seen going down the side of the walls as others laid around in wait.

The incident appeared to have occurred at Blk 118 Clementi St 13, according to one commenter.

While some commenters expressed anger and shock at the monkeys' bold act, many noted that humans have a part to play in why the macaques are now being spotted in residential areas.

Wrote one commenter: "Don't blame them! You cut their trees, so they need replacement!"

"Consequences of taking their habitat and livelihood. This world wasn't solely created only for humans but for humans and animals to leave together".

Others warned of the dangers, especially for those with children, as the monkeys could turn aggressive if provoked.

One netizen said that it's time to lock the house windows when he's out and that "this is getting out of control".

But yet many commenters could not help but see the humour in the situation.

While some were impressed by their physical prowess. 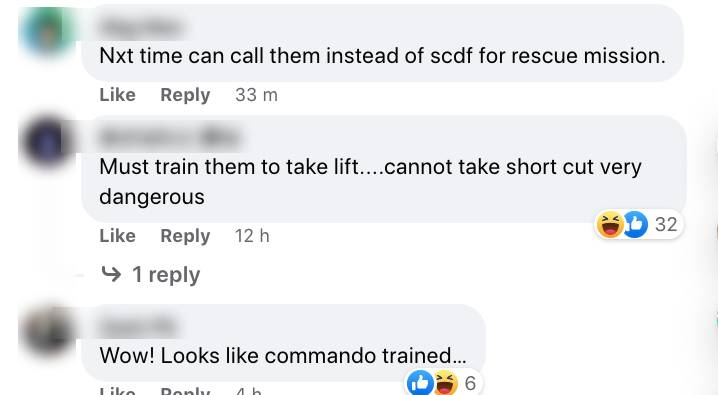 Reports of monkeys intruding upon our urban jungle are not new.

Just days earlier, a troop of more than 10 long-tailed macaques were seen intimidating passers-by at public walkways and bridges at Punggol East.

There have also been several primate-human conflicts reported at the Nanyang Technological University since last year.

In 2021, a macaque at Punggol's Waterway Sunbeam estate was caught by the Agri-Food and Veterinary Authority of Singapore after it scratched the leg of a young boy.