MOM said it will step up inspections at Lucky Plaza, City Plaza and Peninsula Plaza to disperse large groups of FDWs.

She was in the Philippines on home leave, but her employer in Singapore terminated her work permit before she could even return.

Sharing the story of the Filipina, who is a foreign domestic worker (FDW) here, Mr Michael Khan, director of employment agency Workforce Manpower, told The New Paper: "She wanted to come back, but her employer did not want her to return because she was afraid she might bring the virus back.

"Her employer told her she could not afford to pay her if she was quarantined, and just decided to cancel her work permit. The maid is now jobless, and very unhappy about it."

This is an example of employers taking extreme measures in response to the Ministry of Manpower (MOM) announcement on March 15 that all new or returning FDWs must serve a 14-day stay-home notice.

On top of that, growing tensions between FDWs and employers over rest day arrangements have surfaced, even before MOM's advisory last Saturday urged maids to stay home on their rest days.

On Wednesday, MOM said it would step up inspections at Lucky Plaza, City Plaza and Peninsula Plaza to disperse any large groups of FDWs. Its officers were spotted patrolling the shopping centres last Sunday.

A spokesman for the Humanitarian Organisation for Migration Economics (Home), a charity advocating migrant workers' rights, said some FDWs have had their salaries withheld because they spent their rest day outside, against their employers' wishes.

Employment agencies TNP spoke to added that some employers have threatened to cancel their FDWs' work permits in order to force them into staying home, or to stop them from returning on home leave to countries where Covid-19 cases have spiked.

Mr Khan said employers are worried about not knowing who their FDWs come into contact with on their rest days.

He added: "Employers have legitimate concerns, especially those with elderly parents or young children at home."

Ms Lynn Ng, who runs employment agency Achieve Employment, said: "Some of the maids feel it is unfair that their employers can go out while they themselves can't.

Work with no pay

"However, the MOM advisory helped us explain the situation to them, and more of them have decided to stay home."

Some FDWs who have chosen to stay home on their rest days end up doing work without getting paid.

The Home spokesman said: "It may be difficult for (FDWs) to assert their rights for fear of displeasing their employers, or getting terminated."

Mr Khan added that it was hard to draw the line between simple favours and extra work that FDWs should be paid for. 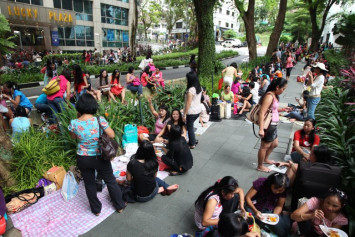 However, one employer, Ms Sherlyn Soh, said her FDW voluntarily decided to forgo her day off and is compensated accordingly.

The 44-year-old career coach said: "I have an eight-year-old daughter, so naturally I am concerned. But my helper and I discussed it openly and respectfully, and she was very understanding."

According to a spokesman for the Foreign Domestic Worker Association for Social Support and Training (Fast), one FDW needed to remit money but was prevented from going out on her rest day by her employer.

Fast helped to mediate the situation and the employer accompanied the FDW to the nearest mall for the remittance.

Mr Shamsul Kamar, executive director of the Centre for Domestic Employees, said it has received 20 per cent more calls from both employers and FDWs on its helpline in the past month compared with the month before.

They were seeking clarity on how MOM's advisory would impact them.

He said: "Both parties should mutually agree on rest day arrangements, since the rest day is fundamentally the right of a (domestic worker)."