Maids work together to steal $8,000 from employer

It's an employer's worst nightmare -- maids working together to steal money from her home.

Two Indonesian domestic helpers took $8,000 from a locked drawer while they were working in a residential unit at Tampines St 82.

One of them was finishing up a three-year contract while the other was newly employed, Lianhe Wanbao reported.

While cleaning a bedroom last October, the women chanced upon the drawer key and helped themselves to the cash stored inside.

The women, aged 40 and 28, intended to split their loot. They hid wads of cash in the recesses of the toilet cabinet, and also sewed the money into hidden pockets in a suitcase.

Three days later, their female employer realised that the money had gone missing. When she questioned them, the maids denied that they had taken the cash. She checked their belongings and found the hidden cash in the suitcase.

Their employer then decided to call the police, who arrested the pair on Oct 17. $7,900 was recovered while the remaining $100 was missing.

Found guilty of theft, the Indonesian women were sentenced to 11 weeks' jail. 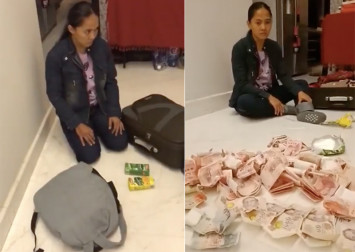 Apparently, it was not the first time the 40-year-old maid had stolen from her employers.

The couple told Lianhe Wanbao that they first had suspicions that the maid was involved when their children's piggy bank became lighter than usual.

But she was good at taking care of the kids and the amount that went missing was small, so they didn't pursue the matter at the time.

What they didn't expect was that her greed would grow.

She eventually conspired with her peer to steal $8,000 before she was due to return to Indonesia.

#Theft/Burglary #MAIDS #In Case You Missed It