KUALA LUMPUR - A High Court in Malaysia has ruled in favour of a Singaporean man who was illegally detained by immigration authorities in 2018, calling for an assessment of damages to be paid to him.

Malaysian lawyer Arun Kasi, who is representing Mr Wong Chun Khuen, told The Straits Times that the Kuala Lumpur High Court has scheduled the assessment for Nov 16, after ruling on Monday that the detention orders issued by the Immigration Department were beyond the law and had no legal effect.

Mr Arun said the immigration authorities, in its defence, had argued that Mr Wong, 65, was issued the orders to be detained and "removed" from the country beyond the court's discharge order.

"So the government must pay my client for illegally detaining him. I will discuss with him the amount he has in mind."

Mr Wong, a retired engineer, was initially arrested by immigration officers on Feb 28, 2018, for allegedly harbouring six illegal immigrants. He owned the house in Johor Bahru where the illegal immigrants were staying, and was arrested when he was at the premises purportedly to carry out repair works.

Under the Malaysian Constitution, he was required to be produced before a magistrate by March 12 that year. But he was brought to court only on March 26.

Mr Wong pleaded guilty before a court in Johor Bahru for immigration offences, and was fined RM30,000 (S$9,300) or six months' jail in default.

He immediately paid the fine but instead of being released, he was detained for another eight days and deported to Singapore on April 4. 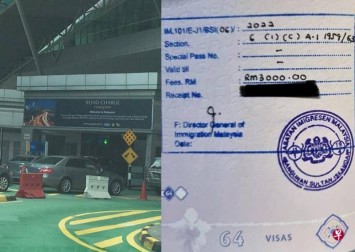 On May 5 last year, Mr Wong obtained a court declaration that his 13-day detention by the immigration authorities - from March 14 to 26 in 2018 - was illegal.

The High Court had found that he was not produced before a magistrate within 14 days of his arrest.

On June 29, an application by Malaysia's Attorney-General's Chambers to strike out Mr Wong's other legal challenge over the additional eight-day detention was dismissed, allowing the suit to be heard in the High Court.

As the wrongful detention occurred in 2018, Mr Arun said the Immigration authorities attempted to argue that the action is time-barred.

"There is a time limitation of three years in certain types of matters when we may sue government offices. Because of the three-year time limit, the action is already time-barred," he said.

"But my argument was that it doesn't apply to any illegal detention of this nature, to which the court agreed with me."