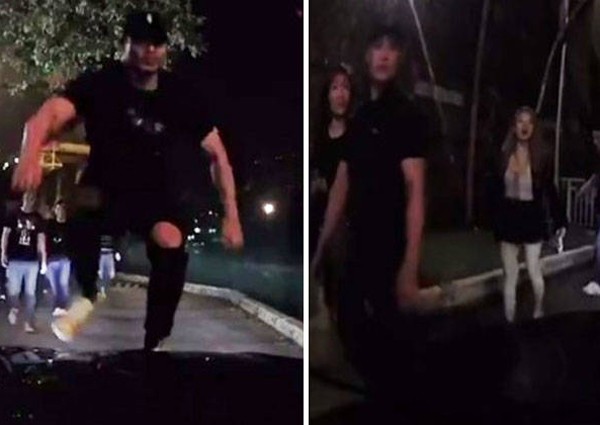 The police have contacted Stomp to relay new developments on the case.

"On May 5 at about 3am, the police were alerted to a case of rash act at 3 Sentosa Gateway.

In response to a Stomp query, a police spokesman confirmed that a report was lodged and the police are currently looking into the matter.

Facebook user Belleiansa Xu is looking for a man who jumped onto his father's car bonnet outside St James Power Station for no apparent reason on Saturday (May 5) at about 3am.

In the post, Xu described how a group of youths had bullied his 72-year-old father who was a Grab driver.

Xu posted photos as well as a video of the incident that was captured by the dashboard camera on his father's vehicle.

In the video clip, a man dressed in a black T-shirt and a cap is seen running towards the elderly man's car as it turns into a driveway.

The man then jumps onto the bonnet of the vehicle, prompting Xu's father to sound his horn.

However, the man does not back down and proceeds to step on the windshield and climbs on top of the car.

The vehicle shakes momentarily, presumably as the man jumps off the vehicle.

Meanwhile, his friends are seen laughing in the background, amused by the stunt he had just pulled off.

A voice can then be heard saying in Mandarin: "Don't be like that."

In his post, Xu wrote: "Hello! Do you have nothing better to do than to bully a 72-year-old Grab driver?

"My dad has done nothing to provoke you."

Xu also alleged that the man's friend had shouted at his father, "We apologised already, what more do you want?".

Fearing for his safety, the elderly driver reportedly drove off to avoid an altercation.