SINGAPORE - A man and a youth were arrested after a fight in the cabin of an MRT train on Wednesday morning (Nov 7).

A video of the incident, which has been making the rounds on social media, shows a person in a dark-coloured jacket trading blows with another person wearing a T-shirt in the last carriage of a train. Other commuters, including one with a child, are seen moving to other parts of the train during the scuffle.

While someone can be heard at the beginning of the video shouting at the pair to stop, no one interferes with the fight on the East-West Line.

The police said that they were alerted to a case of affray at 5 Raffles Place at 10.48am. 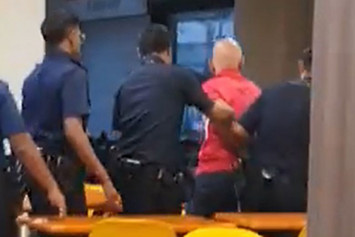 They arrested a 16-year-old youth and a 25-year-old man in connection with the case.

The Straits Times understands that the pair did not know each other before the fight, which was allegedly sparked by a staring incident on the train.

The train stopped at Raffles Place MRT station after a passenger pressed the emergency button.