SINGAPORE - One of two men who made false corruption allegations against Manpower Minister Josephine Teo and her husband has apologised and taken down the offending post after legal letters were issued to them.

In a post late Wednesday (May 20) night, Facebook user Donald Liew said a statement he published on May 14 was false and completely without foundation.

His post had alleged that Mrs Teo and her husband had improperly benefited from the coronavirus outbreak in migrant worker dormitories here and the development of "emergency housing facilities" for Covid-19 patients.

"I apologise unreservedly to Mrs Josephine Teo for making (the allegations). I have removed the statement and undertake not to publish any further statements on this, or to make any allegations to the same or similar effect, in any manner whatsoever," Mr Liew wrote.

The apology came after Mrs Teo's lawyers from Allen & Gledhill issued letters of demand to Mr Liew and activist Jolovan Wham on Wednesday, requiring them to withdraw corruption and profiteering allegations that Mrs Teo called "untrue, scurrilous and completely baseless".

Mrs Teo, who is also Second Minister for Home Affairs, said in a statement issued by the law firm on her behalf that neither her nor her spouse had any involvement in the commissioning of the projects at Singapore Expo or the monetary transactions.

Surbana Jurong dealt directly with the Ministry of Health (MOH) and Ministry of National Development (MND), she said in response to several posts circulating on social media and messaging platforms like WhatsApp that alleged conflicts of interest in Surbana Jurong's development of the Singapore Expo facilities.

One such post highlighted Mr Teo's role at Surbana Jurong.

Mrs Teo also said that while she understands she is legally entitled to substantial damages, she does not intend to pursue the matter further or claim damages if the allegations are publicly withdrawn and apologies given.

The legal letters also require Mr Liew and Mr Wham to make a donation of $1,000 each to the Migrant Workers' Assistance Fund.

It is not clear if Mr Liew has made the donation. 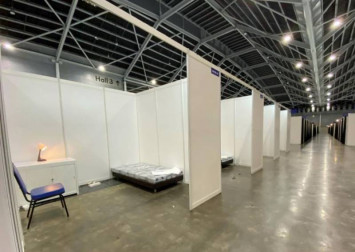 In a joint statement on Wednesday, MOH and MND clarified that the Government had asked Singapore investment company Temasek to help set up a CCF as the firm had the necessary resources to do so at short notice through its subsidiaries.

The ministries said Temasek agreed to assist and the work done would be at cost recovery basis, and in some cases, below cost.

They added: "The Government accepts that legitimate questions can be raised about the spending, and is fully prepared to explain why and how money was spent.

"However, the Government will respond firmly and appropriately to any scurrilous allegation of corruption."