SINGAPORE - A 30-year-old man was arrested on Wednesday (Dec 26) after he allegedly filmed a woman while she was in a toilet cubicle in Tampines.

The police said that they were alerted to the incident, which was classified as a case of criminal trespass and insulting the modesty of a woman, at around 1am on Wednesday morning.

The incident took place at the NTUC Income building in Tampines, which is in the vicinity of 300 Tampines Avenue 5.

The victim, who is in her late 20s, told The Straits Times on Thursday that she and two female friends went to the toilet, which had three cubicles. 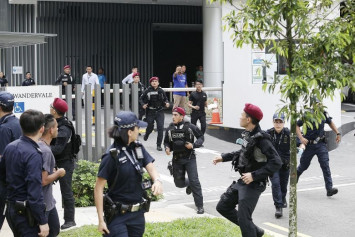 When the victim was inside, however, she looked around and was shocked to see a hand sticking out underneath the side of the cubicle, holding a phone.

She also noticed that the phone was in selfie mode, and recording a video.

At that point, she shouted loudly and quickly left the cubicle. A few seconds later, the suspect emerged from the cubicle on the right.

"My friends and I were in shock," she said.

According to her, the man apologised and asked her to give him "a chance", claiming that he had already deleted the video he took of her.

The victim then demanded that he hand over his phone, and told one of her friends to call the police. 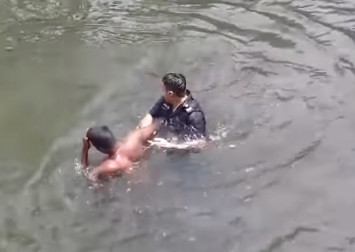 However, as her friend was taking out her phone to dial for help, the suspect seized the opportunity to escape.

"The three of us tried to stop him but he was too strong for us and managed to get out of the toilet," said the victim.

Thankfully, the victim's male friend was waiting for them nearby. When he heard them shouting for help, he headed towards the toilet just in time to see the suspect running away.

He then gave chase and managed to grab hold of the suspect. Two other men who happened to be nearby also helped to detain the suspect after the victim asked them for help.

While her friend was holding on to the suspect, the victim also managed to get hold of the latter's phone.

She said that in it, she found about 10 videos of other women in various states of undress, who the suspect appeared to have filmed while they were using the same cubicle. The victim added that as the videos were taken in selfie mode, she also saw the suspect's face in all of them.

In the meantime, her male friend was still restraining the suspect, who kept apologising and even said "Merry Christmas" at one point. 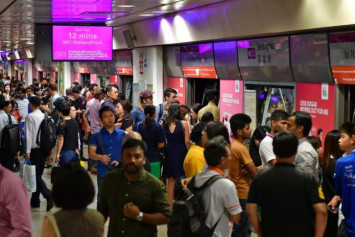 In a statement on Thursday, the police said they are investigating the incident. They added that they treat such cases seriously and will not hesitate to take action against anyone who commit such offences.

The victim later posted about her experience on Facebook. Though recounting such a traumatic incident was not easy for her, she said she felt it was important to do it to raise awareness that such incidents can happen to anyone.

"It was very traumatising," said the victim, who added that she is still distressed at what had happened.

She said: "It is something that I didn't expect would happen to me... (now) I believe it can happen to anyone.

"So instead of thinking that you will never be the next victim, be vigilant and be aware of your surroundings."