Former Night Owl Cinematics (NOC) co-founder's Ryan Tan's confession on social media that he is "officially broke" has prompted one man to send him $1,000.

Tan's candid admission comes about six months after his announcement that he'd left the media company he co-founded with ex-wife Sylvia Tan, amid a maelstrom of controversy surrounding the alleged mistreatment of NOC's employees by Sylvia.

In his IG stories believed to have been published on Friday (June 24), the 33-year-old shared that he was "officially broke" and "it's not a joke".

Tan revealed that he'd "lost more than 90 per cent of my money since I left my previous company" and that he's "barely holding on".

He explained that his income was affected by legal fees as well as the starting of new companies, hinting that he has yet to pay himself in his new roles.

There is a silver lining, however

His stories appear to have touched the hearts of some Singaporeans, with several reaching out to offer him cash donations or messages of support. 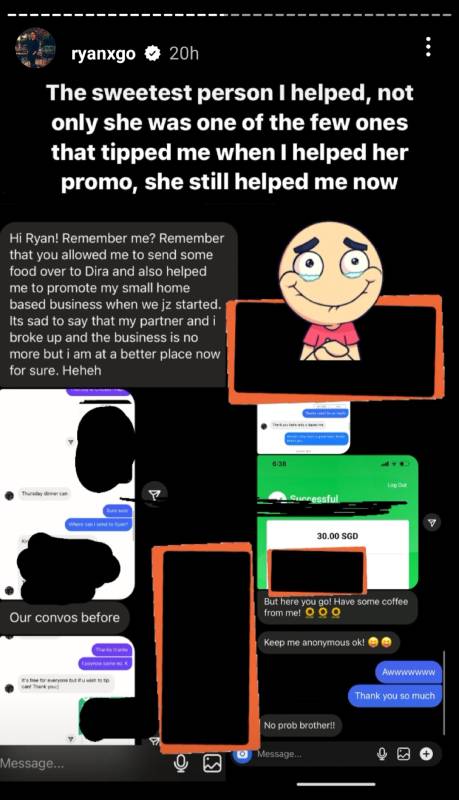 One of them is Khoo Keat Hwee, who happens to own Mentai-Ya Japanese Cuisine, a chain of hawker stalls specialising in rice bowls.

Khoo himself knows what it takes to bounce back from failure, after sharing stories of how he had run into debt of $120,000 (including money borrowed from loan sharks) about four years ago following an F&B venture which went bust.

In interviews with Shin Min Daily News and 8 Days, Khoo shared how he had to pull 12- to 16-hour shifts working as a Grab driver for two years in order to make his debt repayments. He has since fully repaid his debt, he told AsiaOne today (June 26).

The 35-year-old eventually found the courage and opportunity to return to the F&B industry during the pandemic and hit on an apparently winning formula. Within two years, his business spawned five hawker stalls and two cafes.

In a TikTok video on Saturday, Khoo shared a screenshot of his message to Tan which indicated that he had transferred $1,000 to the latter.

He clarified in the caption that he'd chanced upon Tan's stories and "didn't know much about NOC nor Ryan".

In the clip, Khoo explained that he had "run away from everyone" after his failure and that he admired Tan's courage in speaking out.

Speaking to AsiaOne, Khoo shared that Tan's story struck "close to heart" as the stories were sent to him by a close friend who provided Khoo with support during his "dark days".

"When I fell, I ran away and didn't dare to speak to many. He (Tan) dared to put down his ego and tell the world he f***** up," said Khoo. He added that it took two years for him to recover and many months before he gathered the courage to message his friends again.

Khoo was surprised, however, to receive a deluge of messages telling him he shouldn't have donated, as "Ryan is rich".

And although Khoo revealed that he "doesn't earn a lot yet", he added: "I think it's okay to give up $1,000 to root for someone who is going through bad days."

Tan later thanked Khoo for his donation in his IG Story on Saturday, adding, "That's crazy bro". In a separate story, he also expressed his gratitude to supporters for their "comforting messages and offers to help", but assured them that they did not have to worry.

"Business is like that, have ups and downs [sic]!" he wrote. "Money lost can be made again like many of you said! I'll find a way! I always do."