Clarence Tang Jia Ming pleaded guilty in 2018 to 30 counts of insulting a woman's modesty and one count of being in possession of 2,103 obscene films for the purpose of distribution.

A digital marketing specialist went to a Holland Village cafe and installed a hidden camera shaped like a metal hook in its unisex toilet to record videos of unsuspecting women.

Clarence Tang Jia Ming, 27, would later delete the videos of women who appeared to be more than 25 years old.

Tang was sentenced on Thursday (March 21) to three years' jail. 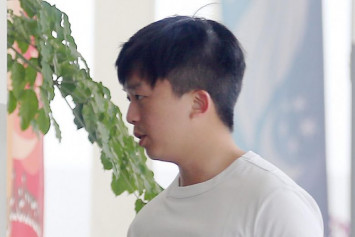 He pleaded guilty in 2018 to 30 counts of insulting a woman's modesty and one count of being in possession of 2,103 obscene films for the purpose of distribution.

Forty-five other charges for similar offences were considered during sentencing.

Tang, who committed the offences between 2014 and 2016, was the fifth and final man to be convicted in a case involving online groups that shared voyeuristic videos taken with hidden cameras in places such as public toilets and changing rooms.

All five men were members of Sammyboy Forum, which is a predominantly sex-themed online site that contained hundreds of threads sharing obscene material.

Tang registered an account on the forum in 2009 and five years later, he came across a thread in which Ong posted hidden-camera films he had recorded.

The pair began to exchange private messages and Tang told Ong, who is also known as Kenneth, that he also wanted to make such clips.

They met at the Holland Village cafe, where Ong taught him how to install the hook-shaped hidden camera in the toilet.

After this meeting, Tang would go to the cafe and install the camera to capture videos of his unsuspecting victims.

On Nov 11, 2016, the Ministry of Education reported to the police that it had received information on obscene videos circulating on the Internet of schoolgirls in toilets or changing rooms taken with hidden cameras.

The clips were found on platforms such as Google groups and the Sammyboy Forum.

Tang is out on bail of $15,000. He was ordered to surrender himself at the State Courts on April 11 to begin serving his sentence.

For each count of insulting a woman's modesty, he could have been jailed for up to a year and fined.