Several police officers were seen gathering evidence near Orchard Towers' entrance, which has been cordoned off, when The Straits Times arrived at the scene at about 11am.

SINGAPORE - Eight people between the ages of 22 and 27 have been arrested for murder after a pub brawl at Orchard Towers left a 31-year-old man dead.

Of this group, four men and one woman will be charged with murder on Thursday (July 4), while investigations are underway for the remaining two men and one woman, said the police in a statement on Tuesday evening.

The police had received a call for assistance at Orchard Towers at 6.25 am on Tuesday, and found a man lying motionless at the location.

The man was taken to Tan Tock Seng Hospital where he was pronounced dead at 7.25am.

When The Straits Times arrived at the scene at about 11am, several police officers were seen gathering evidence near the building's entrance, which had been cordoned off.

A pool of blood could be seen at the building's entrance, along with a small mound of blood-soaked tissue paper.

At about 1pm, most of the building's second floor and entrance remained cordoned off for investigations.

The police were seen speaking to people at the Naughty Girl Club on the same floor. 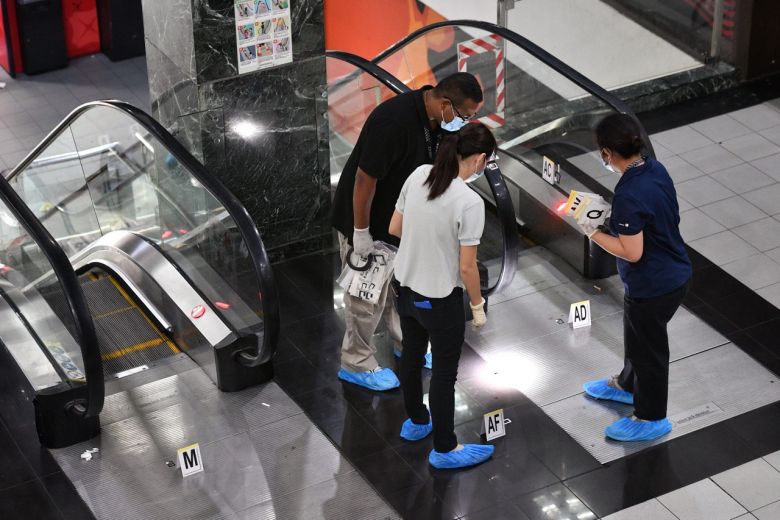 Shopkeepers at Orchard Towers said they heard a group of people shouting and fighting in the early morning. They believed the fight originated in the Naughty Girl Club.

Mr Muhammad Bilel, 40, who works at a convenience store on the first floor, said his colleague who was on the early morning shift had heard a commotion outside the store.

"He heard a lot of people shouting and fighting, but he couldn't go out because he had to look after the shop," said Mr Bilel.

Another store owner, who requested not to be named, said her workers had called her in a state of panic at around 7am to tell her about the incident.

"They were all so scared, when they arrived they saw someone lying on the floor outside (at) the building's entrance," she said, adding that it was unclear who was involved in the fight.

She said the fight had reportedly started inside the Naughty Girl club, but the group continued fighting on the first floor.

Closed-circuit television camera footage from a shop on the first floor showed that a group of about 10 men and women had walked towards and struck the victim after he stepped off the escalator.

After several blows, the man fell in front of the building's glass doors, according to the footage, which was seen by The Straits Times.

A storekeeper from May Tailor and Alteration said footage of the incident has been circulating among the building's tenants.

"Someone took a video of the paramedics trying to save the man, and I could see there was blood all around his body," she said.

The police said the suspects were identified and arrested within 12 hours by officers from the Criminal Investigation Department (CID), Tanglin Police Division and Woodlands Police Division.

Deputy Commissioner of Police (Investigation and Intelligence) Florence Chua commended the officers for their work.

"The Police are committed to keep Singapore safe and we will spare no effort to track down offenders to ensure that they are brought swiftly to justice and face the full brunt of the law," said Ms Chua, who is also the CID chief.