SINGAPORE - A Singaporean store assistant was told by a fengshui master in Malaysia that he would face a life-threatening mishap that could be averted only if he had sex with a virgin.

The fengshui master offered to help him get a virgin for RM2,000 (S$650), but the man decided to have sex with his own 11-year-old daughter instead.

The offences were committed sometime between October and December 2018.

The term included additional jail time in lieu of caning, as he cannot be caned due to his age.

Justice Pang Khang Chau agreed with prosecutors that the offences were premeditated, as the man committed them following the fengshui master's advice in September 2018.

The judge noted that the man had also waited for his wife and elder daughter to leave home before preying on the victim.

Seven other charges, including six for aggravated outrage of modesty, were taken into consideration.

The man cannot be named due to a gag order to protect the identity of the victim, who is now 14.

The man lived with his wife, son and two daughters in a flat with four bedrooms.

The son kept to himself in one room, while the two girls slept with their parents in two other rooms without a fixed arrangement. The remaining room was used as a study.

Sometime between October and December 2018, on a night when the man and the victim were sleeping in the master bedroom, he touched her inappropriately and told her not to tell anyone.

After this incident, she avoided sleeping alone with him.

He then found opportunities to sexually exploit the girl during the day.

One afternoon, shortly after his wife and elder daughter went grocery shopping, he went to the master bedroom where the victim was watching YouTube videos, closed the door and raped her.

The girl did not tell her mother or sister what her father did to her, as she did not want her parents to get divorced. 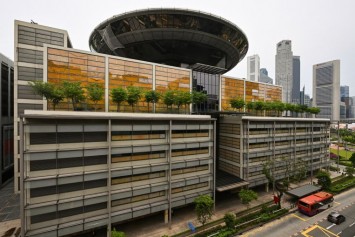 She was also afraid that her mother would blame her, as her mother had told her that she should not let anyone touch her.

The matter came to light when the victim's behaviour in school took a turn for the worse and she was caught for using an e-cigarette and drinking vodka.

On Aug 28, 2019, she broke down when she was questioned by her form teacher and revealed that her father had "touched" her.

The school counsellor and the Ministry of Social and Family Development were alerted, and the victim was taken to make a police report.

The court heard that the girl had repetitive thoughts of the sexual acts during her Primary School Leaving Examination.

Deputy Public Prosecutor Joshua Lim said in sentencing arguments: "Not only did he see his daughter as a sex object, he also saw her as a cheaper alternative instrument through which he would save himself from harm."

Defence counsel Audrey Koo said the man was truly remorseful and that he had been constantly plagued by fear over the prophesied tragedy.