When out and about in nature, sometimes it is worth taking a second look.

A man was in for a surprise when he noticed something at the Sungei Buloh Wetland Reserve which was seemingly a "fake rubber toy" at first – and sent his account and photographs to Stomp on Thursday (July 1).

"While walking to the Sungei Buloh Visitor Centre, I happened to see a snake resting near the top of a sheltered walkway. I believe the snake is an Oriental Whip snake," the man, only known as Timothy, said.

He said that he only visits Sungei Buloh a few times a year.

"This is my first time encountering a snake up close and it seemed to be sleeping. I actually thought that somebody had placed a fake rubber toy snake up there because it was so still.

Upon approaching it, the snake only started to move a bit when I disturbed the nearby branches," he said.

The Oriental Whip Snake is native here with a vivid green colour that helps it blend in with the foliage during the day when it is most active. 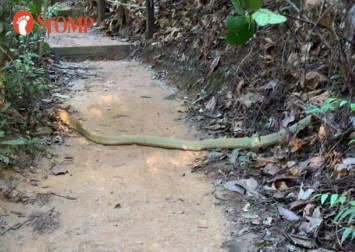 It has a pointy snout that is evident from the side, which distinguishes it from its very slim body. The pupil of its eye is horizontally elongated.

The snake may grow up to a length of 1.9 metres and feeds on small animals like lizards, frogs, and birds.

Despite being mildly venomous, this snake is often shy and docile, preferring to avoid humans. It usually lives in trees and shrubs and can be found in wooded areas, suburban parks, and gardens.

Timothy added: "It was an interesting experience and encounter for me. I also feel special and delighted to be able to witness such animals within a very close proximity."